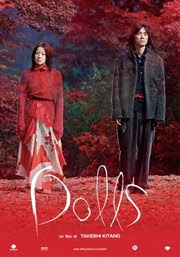 Reviewed by Chris MaGee
Let me start this review of Takeshi Kitano’s beautiful and lyrical trio of stories inspired by bunraku, Japan’s puppet theatre, on a totally unrelated topic: punk rock. I was sitting with some friends watching the great documentary by Don Letts about the history of punk called “Punk Attitude”. In it they were talking to Chrissie Hynde of The Pretenders and she made an interesting point. She said (and I’m paraphrasing here) that by its very nature punk as a form of music is ultimately doomed to self-destruct, and that’s not because of the violence or the drugs or the nihilism. It’s due to the fact if people actually take making music seriously then banging out three chords over and over again won’t be enough. They’ll naturally want to get better at playing their instruments. So what does that have to do with Takeshi Kitano’s 2002 film “Dolls”? Let me explain.
Static camera work, long unbroken shots, elliptical editing, and a colour palate dominated by blues and greys; these along with lots of bullets and trips to the beach were the trademarks of the Kitano-style from the very beginning. By his own admission, though, many of these trademarks were forged out of necessity and inexperience. Kitano had never directed a film before, so he was afraid of moving the camera around too much, of keeping what he wanted in frame. Beach shoots were easier because shooting in the city created problems with crowd control. The style that eventually led Kitano to winning the Golden Lion for “Hana-Bi” was of a self-taught artist learning his craft as he went along; much like punk rock. Again, what does this have to do with “Dolls”? Let me explain further.
Kitano’s 8th film, “Brother”, the story of the yakuzu in America, was everything a Kitano film should be; a gangster plot line with Kitano’s deadpan mug front and centre and all the techniques outlined above present and accounted for. Frankly it was almost self parody, so when it came to his 9th film Kitano was ready to mix things up, in no small part to his new found technical confidence: “I feel as if I've got through the qualifying heats and reached the Olympics. Now I'm at the point where I want to make films that fulfill my creative needs,” Kitano explained in a 2003 interview. His Olympics were three delicately told and tenuously connected stories about love; ferociously loyal, heartbreakingly patient, and wholly misguided. 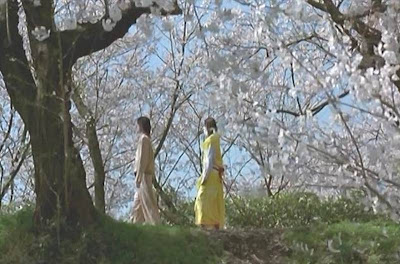 “Dolls” starts out in Osaka’s Nantional Bunraku Puppet Theatre with a performance of Chikamatsu’s play “The Courier of Hell”. While not adapting its story of a man who embezzles money to help redeem a courtesan he loves Kitano instead takes Chikamatsu’s grandiose approach to matters of the heart and applies that to the present day. The first and most deeply explored story is that of Matsumoto, an ambitious young man who pressured by his parents breaks off his engagement to his true love Sawako. Just prior to the wedding though Matsumoto calls everything off when he finds out that Sawako has attempted suicide. Partially brain damaged by the pills she’s ingested Matsumoto gives everything up (literally) to take care of her. Bound together by a red chord the two lovers, now homeless, wander through the rest of the film and into the other two stories; that of an aging yakuza boss who discovers that an old girlfriend has never stopped waiting for him at a local park, and the rabid fan who goes to extreme lengths to meet his idol, a pop starlet who’s suffered a disfiguring car accident.
Aware of his blue/ grey tendencies Kitano fills every frame of “Dolls” with opulent colours and breathtaking compostions and editing. He also enlisted the help of fashion designer Yohji Yamamoto who helps bridge the gap between humans and bunraku puppets and long time collaborator Jo Hisaishi who provides a wonderful spare soundtrack. Many critics have leveled the same kind of criticism against “Dolls" that they have against Kitano’s “Takeshis’” and “Glory to the Filmmaker”; “Dolls” is too technically ambitious and the stories are lost underneath Kitano’s often intuitive editing choices, his new found rainbow colour palate, but here we double back to punk rock and a question to the critics: Would you rather have your favorite filmmaker stay clumsy with their instruments and delivering the same films over and over again, or will you accept that their maturing skills and ambition will take them, and subsequently you, into uncharted territory? Fans of Kitano may want to ask themselves this question and give “Dolls” another shot.
Posted by Chris MaGee at 12:40 PM