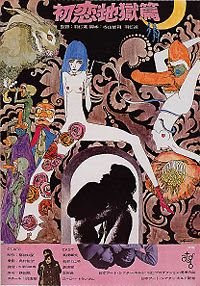 Reviewed by Chris MaGee
Boy meets girl. Girl takes boy to a hotel for sex. Boy seems nervous and keeps worrying about the cost. Girl tries her best to reassure him. In the hotel room introductions take place. The boy's name is Shun and he's nervous because this is his first time. The girl, a nude model, is named Nanami. There's some petting and kissing and Nanami is quickly out of her clothes, but all Shun can muster are giggles. Instead of sex there's conversation, "Tell me about yourself," and flashbacks of Shun and Nanami's life before this afternoon.
Shun is an orphan. His father died when he was 7 years-old and his mother abandoned him shortly thereafter to marry a boxer. A hyperactive child he was bounced around reform schools until he was taken in by a metal worker and his wife. Learn a trade and become a productive member of society, sounds like a good plan, and without parents of his own he's soon calling the metal worker and his wife dad and mom. The only problem is that dad doesn't see Shun as a son. He sees him as a delinquent and even worse as a sexual play thing.. Shun suffers abuse all through his boyhood.
As for Nanami, she came from her home in Shizuoka to work in a factory in Tokyo. The work 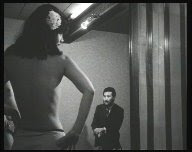 was hard and the pay was terrible and soon she was laid off. With no work on the horizon and on the advice of a couple girlfriends she takes a job as a nude model in a Shinjuku club. For a few yen Nanami will strip naked and men can take her picture or just sit and oogle her. With her youthful face and womanly body she becomes one of the most popular girls, popular enough to catch the eye of a married man and pyromaniac who runs his own camera club that caters to men who prefer violence and cruelty to sweet pin-up girls.
So, boy meets girl, but this certainly doesn't resemble any boy-meets-girl story that I've ever encountered. Then again, "Nanami: Inferno of First Love" (1968) was directed by one of the boldest stylists of the Japanese New Wave, Susumu Hani, and just as importantly co-written with the famed cinematic iconoclast, Shuji Terayama. How could anyone expect a traditional boy-meets-girl love story from the director of the oft-banned underground classic "Emperor Tomato Ketchup". Not to say that there's not a sweetness between Shun and Nanami, both played by non-actors. Alone in their hotel room you wouldn't be able to tell what burdens they carry, but Hani and Terayama aren't so much concerned with that first bloom of young love. Instead they delve deeply into the subterranean caves of human sexuality and how the pain and confusion of life can so easily trickle down into them.
In many ways "Nanami" is a hard film to sit through. While the film's portrait of someone abused 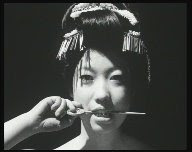 as a child becoming an abuser as an adult is accurate the depiction of Shun's sexual confusion is at times shocking. Also the scenes of the sadomasochistic camera shows put on by Mr. Ankokuji in what could literally be a subterranean cave are uncomfortable to watch if only because they turn us in the audience into one of the leering observers.
For its brief North American theatrical release 20 minutes had to be cut from the film's 108 minute running time. If you get a chnace to see "Nanami" make sure you're getting the full version regardless of the discomfort. In the end it's worth it.
Posted by Chris MaGee at 8:53 AM