It may seem strange that Yasujiro Ozu, a lifelong bachelor, would have had such a strong understanding of children, but if his 1932 silent comedy "I Was Born, But..."is any evidence he did. He'd have to because this is a story told almost exclusively through the eyes of children.
Mr. Yoshii has taken a new position with his company in order to get his family out of the close quarters of the city and behind the white picket fences and trellised gates of the suburbs. His two sons, older Ryoichi and younger Keiji are having a hard time adjusting to this brave new territory though. The schoolyards and playgrounds of the Yoshii brother's new neighbourhood are ruled by a gang of children led by the dreaded bully, Kamekichi. Big, strong and mean he steals lunches and doles out beatings to Ryoichi and Keiji telling them that they have "faces like germs". It's enough to make the boys play hooky, but when their father finds out about their truancy he sternly lectures them about the importance of going to school and of not giving into the world's bullies, of not letting yourself be demeaned in that way. 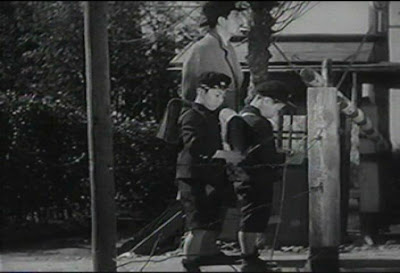 While the platitudes don't help much the teenaged boy who delivers sake to the Yoshii house certainly does when he takes Kamekichi down a few notches, after which life in the suburbs starts settling down for Ryoichi and Keiji. That is until everyone gathers at Mr. Yoshii's boss' house for an afternoon of home movies. The boys are horrified to see their dad making faces and mugging for the camera to amuse the director of the company. What happened to not giving into the bullies? Not letting yourself be demeaned?
From here "I Was Born, But..." goes from a comic Little Rascals-esque look at chikdhood to a story that fits snuggly into the usual concerns of a Yasujiro Ozu film; the differences between generations and the friction that often occurs between them. The boys, Ryoichi especilly, can't reconcile the father that lived in their minds with the goofy clown in the home movies. "You're a nobody! A nothing!" Ryoichi angrily berates his father and the two boys decide to go on an afternoon long hunger strike to protest this truly hard life lesson; that there is still the influence of the schoolyard as you grow into an adult and that we grown ups often have to give into the kids with the biggest wallets and toys in order to get by.
Ozu revisited this story in 1959, reworking the film, as he did so many of his others, as a sound and colour tribute to American sitcoms called "Good Morning", but the comparison between the world of children and that of adults and the very slim margin that seperates the two was nowhere near as strong as in this classic film.
Posted by Chris MaGee at 8:46 AM