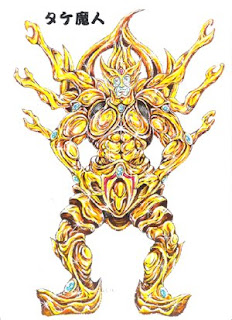 A few days ago I posted a link to a story at Kaiju Shakedown about Minoru Kawasaki directing a sequel to the 1967 camp classic “The X from Outer Space”. The KaIju Shakedown article was titled “Guilala meets Takeshi Kitano” and I wrongly reported that Kitano would not be involved in the project. Well, according to Don Brown at Ryuganji.net it now turns out that he will and in a BIG way, as in several storeys high.
Kitano will do battle with Guilala at the climax of the film as “Takemajin”, “a deity that has protected the Japanese people since time began” (or at least since Takeshi’s Castle was on the air.)
The concept art for Kitano’s kaiju debut is pretty wild, but I love the fact that they have him standing in his classic “comaneci” pose.
Check out all the details that I screwed up over at Ryuganji.net: http://www.ryuganji.net/2008/04/25/kitano-takeshi-vs-monster-x-as-referred-by-kawasaki-minoru/
Posted by Chris MaGee at 7:06 AM