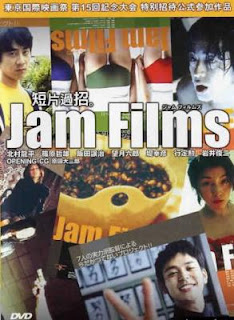 Reviewed by Chris MaGee
Imagine if Shunji Iwai, Ryuhei Kitamura, Rokuro Mochizuki AND Tsutsumi Yukihiko all directed a movie together! Maybe that would be too many cooks in the kitchen, but it makes for a really interesting “what if” scenario, huh? Well, in 2002 the closest thing to that was released along with three other talented directors in the mix. “Jam Films”, a collection of short films was assembled by producer Nobuya Kawai, is a fantasic primer to some of today’s most important voices in Japanese cinema… but the only way to do it justice is to give brief reviews of these wonderfully crafted and sometimes bizarre films.

The king of Japanese action films reigns it in a bit in this ghostly tale about a mysterious female messenger sent to give a warning to a gangster holed up in his concrete bunker. I haven’t been kind to Kitamura in the past (too much sound and fury with little or no attention paid to plot or characters), but I have to say that this tale of revenge is note perfect and is probably my favorite of anything I’ve seen him produce.

After a mix up on the street a man finds a kendama, a Japanese ball and hammer toy, that leads him on a treasure hunt, the results of which will have him face his fears and the state of his relationship with his girlfriend. Of all the films this is the one that tries hardest and being a comedy, but it isn’t entirely successful. The relationship storyline gets tired over the short running time, which isn’t a good sign, and I found myself wishing that Shinohara had focused on the subplot involving two office workers.

A man is awakened from suspended animation only to find himself in an elementary school peopled by adults in garish costumes playing hide and seek. This hook certainly caught my attention, both visually and narratively, but I found myself quickly let down. Iida ends up blunting the power of his plot twist my adding a touch of sex farce and a crude comedic ending. Too bad. During it’s first few minutes thought this would have been my favorite of the collection. 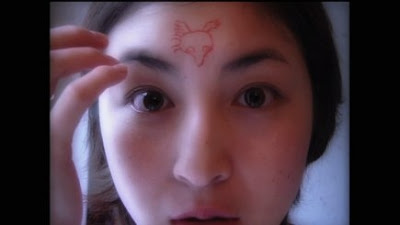 A man nervously holds a family hostage… or is it the other way around? This puzzling, off-kilter and darkly hilarious short has to be my favorite of the bunch. Tsutsumi Yukihiko has a true talent for taking the mundane, like sitting around and eating a big bowl of hijiki (a form of seaweed), and skewing it so that us audience members are left scratching our heads, which is a good thing. We may never learn what is behind this hostage situation, but when a film is this much fun who cares.

While giving congressional testimony after the occupation of Japan General MacArthur stuck his foot in his mouth by comparing the Japanese people with “12-year-old adolescents”. He later said that this comment was taken out of context, but the slight has never been forgiven, so when I say Yukisada’s “Justice” I had to laugh. As a Western teacher reads aloud from the Potsdam Declaration that outlined the terms of surrender to the Japanese at the end of the war his class, made up of teenaged boys scribble dirty cartoons and drool over the girl’s running class in their leotard shorts. Take that MacArthur!

A bit of a sweet retread of the territory that Iwai covered in “All About Lily Chou-Chou” this beautifully shot film is told from the point of view of a teenaged girl who has been followed by a little doodled character named “Arita” her entire life. Drawings, school papers, application forms, “Arita” has appeared on them all, but she has no memory of drawing him. It isn’t until she finds a website dedicated to the little character that she realizes that she’s not alone.
Posted by Chris MaGee at 7:13 AM