If you’ve spent any time in Japan you’ll have seen statues of tanuki or “raccoon dogs” that stand sentry outside restaurants, bars and sometimes in people’s gardens. Like the ubiquitous maneki neko (lucky cat) statues these wicker hat wearing woodland creatures are believed to bring prosperity to the businesses that they guard. Tanuki aren’t just glorified garden gnomes though. Their role in Japanese folklore goes back centuries, and along with the fox they were considered masters of shape-shifting, turning themselves into everything from wandering Buddhist monks to cast iron tea kettles in order to play tricks on unsuspecting humans. Nowadays though tanuki are more likely to be seen up in outlying areas around Japan and sometimes, like our own raccoons, rooting through gardens and trash cans looking for a quick bite to eat.

In 1994 famed anime director Isao Takahata (Grave of the Fireflies) resurrected the tanuki’s magical reputation so that they could fight against the developers and urban planners who turned the Tama Hills southwest of Tokyo into just another bedroom district. He called their battle “Heisei Tanuki Gassen Ponpoko (Heisei-Era Tanuki war Pom Poko” or as Western audiences know it, “Pom Poko”.

The Tama Hills were almost 3,000 hectares of idyllic farmland and rolling countryside, but during the boom years of the 60’s Tokyo city planners feared that the skyrocketing population would lead to a mish mash of disorganized urban sprawl around the city’s outskirts. They had to think of a way to combat this and quickly. In 1965 one of the largest urban development plans was put into motion: transforming The Tama Hills into New Tama, a suburban paradise for the people of Tokyo . The development too six years and by the time the first phase opened it was estimated that over 300,000 people could move into the area. 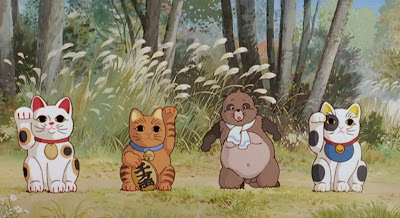 Set during this time Takahata tells the tale of formerly warring groups of tanuki who displaced by this encroaching development join forces to save their forest home. The only problem is that tanuki, according to Takahata, are notoriously lazy, so they’re more than a bit rusty when it comes to using the only weapon they have at their disposal: their ability to change shape. The leaders of the group use boot camp tactics to try and get their fellow tanuki up to speed, but for every human they scare away with their shape-shifting tricks ten more come to replace them. It’s no good. The tanuki elders are left with no choice: either send delegates to find the shape-shifting masters of Sado and Shikoku and ask for help or risk losing their home forever.

While Takahata’s Studio Ghibli partner Hayao Miyazaki has always been vocal about his pro-nature/ anti-progress stance his films have always couched the message in fantasy and allegory. In the case of “Pom Poko” Takahata pulls no punches, turning his cute, furry tanuki into furious eco-warriors. The blatant environmental message didn’t hurt the film at all with the Japanese public though. The tanuki of “Pom Poko” beat out some other animated animals at the Japanese box office. You may have heard of the film. It was called “The Lion King”.

Despite its huge success at home “Pom Poko” has been the black sheep of the Studio Ghibli films that have been released abroad. Many critics have called it dark and evil, foreign, and so culturally specific that it’s untranslatable, but for me this is what makes the film so fascinating and fun. No doubt about it, “Pom Poko” is a dense film. If all you want is a cute Disney-esque animal story then “Pom Poko” will leave you scratching your head; but if, like me, you prefer a bit of education with your entertainment then this film is a wonderful, whimsical primer of Japanese folklore, pop culture and history.
Posted by Chris MaGee at 2:14 PM