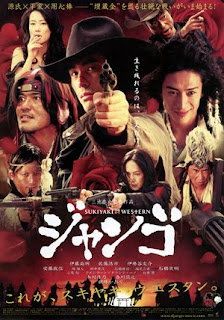 Blame it on Akira Kurosawa and John Ford. It was through their mutual admiration that the first cross-pollination between the American western and the Japanese jidai-geki took place. Many people think it was Hollywood that came knocking first, remaking Kurosawa’s “The Seven Samurai”, “Yojimbo” and even “Rashomon” into wild west adventures, but Kurosawa was a huge fan of John Ford and incorporated aspects of Ford’s stories of the American west into his own historical action/ dramas. “Westerns are liked by everyone,” Kurosawa once said, “I have learned from this grammar of the western.”
It’s unfortunate that Takashi Miike didn’t learn that grammar before making his loose remake of Sergio Corbucci’s “Django”. Miike’s east meets west mash-up, “Sukiyaki Western Django” (2007) begins very much like one of the Kurosawa classics. “Don’t get any ideas about playing yojimbo,” Hideaki Ito as the nameless wanderer is told by a member of the Genji, or The Whites, one of two gangs warring over gold, turf, and power in a small Japanese town. The other gang, The Heika or The Reds, had originally been invited by the townsfolk to police the streets after scores of prospectors came sniffing around for treasure. The problem is The Reds weren’t much better than the low lives they’d been brought in to take care of. Before long the townsfolk have to bring in The Whites to protect them from their protectors and months into the feud no one is safe. It takes not only the nameless wanderer, but an aging female gunslinger and a young boy born of a Genji mother and Heika father to sort out both sides.

Miike being Miike “Sukiyaki Western Django” is a wild and whimsical experience. He plays with the genre conventions of the western and jidai-geki as freely as a child plays with bottles of tempra paint. His boldest move is filming everything in English even though most of his cast can’t speak the language. It gives the film the feel of its Italian Spaghetti Western roots, but along with this Miike mixes in the rag tag, punk inspired costume designs of Michiko Kitamura, Shakespeare spouting gang members, Nevada transplanted to 14th century Japan and Miike himself playing a trumpet playing member of the ancient Anasazi tribe. But to bring the analogy of the child playing with paints full circle Miike ends up mixing too many colours for far too long and ends up with mud.
The most telling choice that Miike makes for “Django”, though, is the casting of Quentin Tarantino as the gunslinger who opens the film and later plays a key role in the story of the half Genji/ Heika boy. His performance is terrible, but regardless of that I believe that Tarantino is a symbol of everything that’s wrong with “Sukiyaki Western Django”. The Tarantino style is one of appropriation and referencing, so that one of his films becomes a film geek’s game of spot the shot, character, plot point, etc. from what are usually obscure, artistically questionable genre and exploitation films. This makes his films clever, funny, and at times wildly creative, but like “Sukiyaki Western Django” ultimately empty.
When Kurosawa said he’d learned from the grammar of the western he didn’t mean a series of “cool” shots, genre clichés or character ticks. The grammar Kurosawa spoke of was much more fundamental: the white hats versus the black hats, heroes and villains, and how us regular folk navigate between and sometimes get pulled into their spheres. It doesn’t matter if we’re shown cowboys or samurai, the grammar is the same and the stories are universally human.
Maybe this review has gone a bit broad for what should be seen as a fun, creative, cinematic in joke. The only problem is that the joke wears thin very quickly, and for a director who is capable of such brilliance as Miike is it’s a shame to see a film that is as stilted as the lifeless English dialogue mouthed by the actors.
Posted by Chris MaGee at 7:47 AM