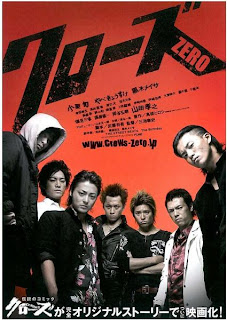 Word today that even though we haven’t seen an official release date yet from Tokyo Shock who’ve picked up the North American DVD rights for Takashi Miike’s “Crows Zero” there are already plans in Japan for a sequel. Apparently set just 8 months after the end of “Crows Zero” left off the story will have the main protagonist Genji opening a can of whoop ass on a rival high school. Miike is set to return as director, star Shun Oguri is already pumping iron to reprise his role as Genji and Toho have things locked in for a 2009 release.

So, “Crows Zero” and now “Crows 2” (strangely no “Crows 1”, but…) Maybe Tokyo Shock should think about waiting and release a double DVD set. Could be interesting…

Read more details at Tokyograph: http://www.tokyograph.com/news/id-3180
Posted by Chris MaGee at 7:03 AM