“Grave of the Fireflies” gets deluxe DVD treatment 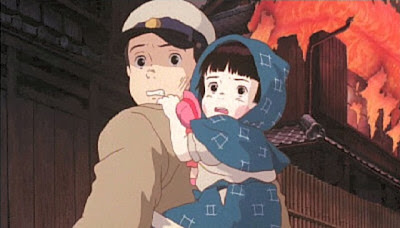 While the vast majority of Hayao Miyazaki’s and Isao Takahata’s films have gotten really nice DVD releases here in North America by teaming up with Disney there’s one glaring omission that mars the whole partnership. Takahata’s powerful and utterly heartbreaking “Grave of the Fireflies” was apparently never part of the Disney re-release deal. Thankfully we have the Central Park Media DVD, so the film is openly available, but it looks like Disney Japan will be giving Japanese collectors (and those lucky enough to have a region free player) the chance to pick up “Hotaru no Haka: The Complete Preserved Version”.

Along with a pristine transfer of the film the DVD will include six audio interviews with director Takahata as well as interviews with the crew, a photo gallery from the original location hunting, trailers, concept art, and an audio CD with a recitation of the story by Japanese actor Isao Hashizume… and yes, it will have English subtitles.

Read more about the release at Ghibli World: http://www.ghibliworld.com/news.html#1205
Posted by Chris MaGee at 7:35 AM