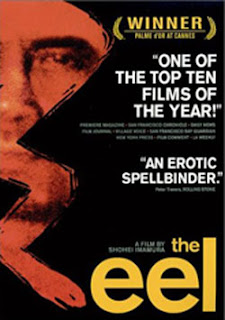 Here I go again trumpeting Japanese cinema as an alternative to the simple binary good guy/ bad guy scenarios of mainstream Hollywood films. If a Hollywood production were to tell the story of a man who kills his wife in a fit of jealously, and not someone falsely convicted as was the case with Frank Darabont’s “The Shawshank Redemption”, but someone truly guilty he would be presented as a deranged psychopath or even worse as having gotten revenge on someone of a lower moral pedigree than himself. Now make no mistake, I am not glamorizing the murder of women… no way… but then again neither is legendary director Shohei Imamura who once again focuses his camera on that vast moral grey area called humanity and gives us a brutal yet sympathetic story of redemption in his 1997 film “The Eel”.
Kôji Yakusho play Yamashita, a mild mannered salaryman who’s receiving letters from an anonymous woman informing him that when he goes on his midnight fishing trips with his friends his wife is having an extramarital affair. One night Yamashita decides to see if this is true by leaving for home early and sure enough his wife is in bed with another man. Consumed by rage Yamashita attacks the couple with a kitchen knife, wounding the man and in a horrifyingly graphic sequence stabs his wife to death. Afterwards, soaked in blood, he calmly rides his bike to the local police station and turns himself in. Jump ahead eight years (Eight years??? For murder? That’s what I thought too, but…) and Yamashita is told by his parole officer to stay out of trouble before being released into the custody of a small town Buddhist priest. The last thing that Yamashita is looking for is trouble. All he wants to do is take his companion from prison, a pet eel, and his new found skills as a barber to some forgotten backwater and be left alone. With the help of the priest and a motley group of locals he nearly does this, opening a barber shop and trying his best to forget about his terrible past… that is until, Keiko, a young woman with a past of her own comes to town to end her life and the local garbage man recognizes Yamashita as a fellow ex-convict. Will Yamashita be able to hide his crimes or will his secret be revealed, jeopardizing his new life and his potential new love with Keiko. 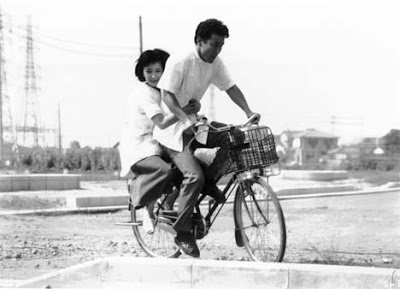 Once again Imamura takes us through the marginalized in Japanese society: the insane, the poor, and of course the guilty; and once again he draws the parallel between our own supposed “civilized” world and that of the animal world, this time personified by Yamashita’s sinuous (and strangely phallic) pet eel. In the Imamura universe moral judgment is suspended in favour of clearly depicting the messy lives of us humans and how we can easily stumble two steps to the right and achieve wonderful things, but also how we can easily stumble a couple steps to the left and we are transformed into devils; and how we can try to atone for these terrible acts if we’re unfortunate enough to walk down this path.
“The Eel” is one of my favorite Imamura films and I am not alone in admiring it. It tied with Abbas Kiarostami’s “Taste of Cherry” to win the Palm D’Or at the 1997 Cannes Film Festival making Imamura one of only three directors who has ever won the coveted prize twice. (Imamura took the top prize at Cannes in 1993 for “The Ballad of Narayama”). This one comes highly recommended.
Posted by Chris MaGee at 8:22 AM