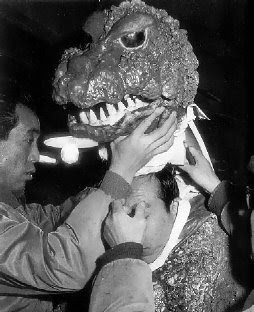 You’d think that with this being the first day of Cannes that there would be an explosion of film news, but things are a bit slow today, so I thought I’d share a truly funny bit of TV care of the BBC. Back in 2002 BBC Choice aired a really entertaining series hosted by Jonathan Ross called “Japanorama” that charted the world of Japanese pop culture.

This is a clip from the episode dedicated to horror, so you get a clip from “The Happiness of the Katakuris”, but the meat of it is a segment about our favorite city smasher, Godzilla. Japanorama talks with Saitama New Urban Center director Tetsuo Takahashi who’s made it his personal crusade to petition Toho to have Godzilla smash his lovely new urban development… and he really gets into the demonstration.

This is pure comedy gold, so I hope you enjoy it as much as I did.