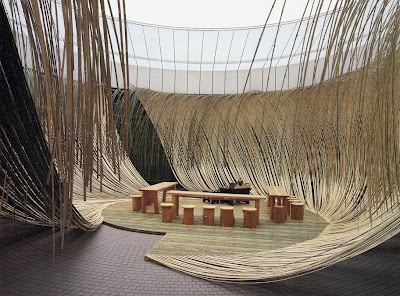 In his review of the documentary “Antonio Gaudi” a couple weeks back contributing editor Matt Hardstaff spoke about how Hiroshi Teshigahara (1927-2001) was more than just a filmmaker, how especially in his later years his artistic vision was channeled through his work in pottery, calligraphy, theatre production and of course ikebana (flower arranging); so when I came across these examples of his merging of ikebana and art installation I knew I wanted to post them on the blog.

It’s widely known that Teshigahara came from a long line of ikebana artists. His grandfather Wafu Teshigahara was a famed ikebana master and his father Sofu championed the idea of ikebana as an art form rather than a decorative craft incorporating materials besides flowers into his work and founding the Sogetsu School of Ikebana in 1926. At the time of his death in 1979 the school was to be taken over by his daughter Kasumi, but tragically she passed away the next year, so in 1980 Hiroshi Teshigahara stepped in and took over the family business, becoming the iemoto or “grand master” and took ikebana into exciting new territory.

The photo above is of a work entitled “Dancing Bamboo” that was installed at the Hiroshima Museum of Contemporary Art in 1997. As you can see the visual lushness and beautiful compositions that were hallmarks of his film work carried over to his ikebana. This can be seen even more dramatically in these photos of an installation simply titled “Bambù” that took place in the Sala delle Cartiatidi in Milan during the summer of 1995. Within the Sala, which has been intentionally left in its bombed out state as a monument to the horror of WW2, Teshigahara used lengths of bamboo, some as long as 8 metres to create a work where “material and space confront each other by contrasting texture and geometry, but they avoid cancelling each other out.”

For more on the Teshigahara family, including Hiroshi’s daughter Akane Teshigahara the current iemoto and the Sogetsu School of Ikebana check out its official website here.
Posted by Chris MaGee at 9:15 AM

If you get to see a good post, then it is very important to praise it, then I want to tell your post that it is a very good post, I have seen such posts very rarely, you are a very settled person, you wrote such a good post. Glad to see, I too keep trying to write good posts in my life, I will get more inspiration by seeing you, thank you for writing your post.
Gurugram Call Girls Service
Ordinary call girls in Gurugram

Welcome to Gurgaon Escort Service. We provide one to one sexiest girls and provide cheap service rates. You can visit our website to take advantage of the service. Cheap Escort Service In Gurgaon