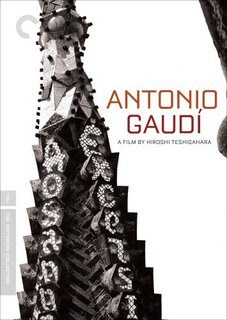 “Everything comes from the great book of nature. Human attainments are an already published book.”
-Antoni Gaudi
Hiroshi Teshigahara was more than just a filmmaker. He was a painter, a sculptor, a director of Noh theatre, and a master of Ikebana, a form of Japanese flower arrangement. What drove Teshigahara was the need to challenge the boundaries of artistic genre conventions, merging forms and styles. What mattered most was the expression, not the form. He was, in a way, the Bruce Lee of the Japanese avant-garde, creating a formless style. His creation of “total art” was the Teshigahara rendering of Jeet Kun Do.
Like most of Teshigahara’s films, Antoni Gaudi is a film that deals with the nature of identity, expressed through art. He establishes the man and his beliefs through art alone, giving us almost no exposition. He quickly guides us through the architecture of Barcelona , then slowly draws us into Gaudi’s world. Through the use of spiraling structures and literally opening the door to Gaudi’s art we are allowed to enter his domain. Gaudi’s architecture is seamless, becoming far greater than the sum of its parts. Each piece flows into the other, the camera gliding down halls and corridors, revealing structures which have no beginning and no end. Everything fuses together into one organic mass. The sea shell inspired spirals guide the camera along each structure. Patterns inspired by roots and branches reach out across ceilings and walls. Teshigahara juxtaposes this natural inspiration of Gaudi’s art beautifully, not only with various rock formations from Catalonia , Gaudi’s native region, but also by having the camera become a personification of Gaudi’s art. He displays both the grandeur of Gaudi’s structures, while still depicting how intricately detailed each piece is crafted. Everything Gaudi learned came from nature. The closer you examine a tree, the more detail you find. The same is true for Gaudi’s architecture. Even the grandest structure is infused with the tiniest attention to detail. The music throughout the film contrasts the grandeur of the classical form with the abstract fusion of the ocean and other naturalistic, experimental sounds, creating a haunting melody. It flows beautifully between the forms, so that there is little, if any, distinction. 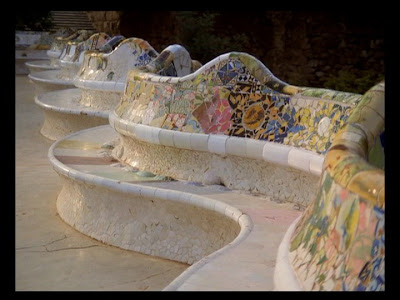 Teshigahara also manages to infuse the identity of the people of Barcelona into his film. Apart from filling the background, the citizens are shown in a few specific instances expressing themselves through dance, religion and commerce. The lines between various forms of expression dissolve and morph into Gaudi-like structures. Everything the people of Barcelona do becomes a form of expression, and Gaudi is the personification of this.
Antoni Gaudi is the quintessential Teshigahara film because it not only highlights Teshigahara’s mastery of a formless, organic style, but it allowed him to explore his own identity through the two men who seemed to have influenced him most. One of these men was his father, Sofu Teshigahara, an Ikebana grandmaster whose own multi-disciplinary art was greatly influenced by Gaudi, and the other was Gaudi himself. In 1959, while joining his father on a European art tour, Hiroshi had an epiphany: “Gaudi made me realize that the lines between the arts are insignificant”.
The Sagrada Familia, Gaudi’s final uncompleted masterpiece, becomes the living end to Teshigahara’s film. Before he died, Gaudi stated that others would come, long after he was gone, to finish his work, adding something of their own, creating something far richer. It was and still is a living structure, scheduled for completion in 2026. Teshigahara continued the tradition of Gaudi by taking what the Spanish artist did and infusing it with his own personality, creating something truly remarkable.
Read more by Matthew Hardstaff at his blog.
Posted by Chris MaGee at 7:37 AM