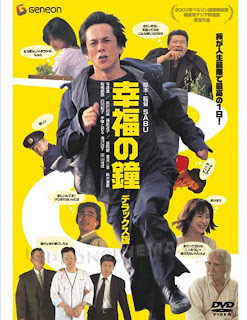 As I watched Sabu’s (a.k.a. Hiroyuki Tanaka) 2002 film “The Blessing Bell” I couldn’t help but think of theoretical physicist Stephen Hawking, or more specifically his theories regarding the big bang and the expansion and subsequent contraction of the universe. That’s not to say that the film has anything to do with the universe, the space-time continuum, or anything like that. “The Blessing Bell” is set firmly here on earth, but it does begin with one singular event that then expands out web of circumstance, synchronicity and chance.

The film starts off as a long walk. A nameless and silent man in work clothes (played by Susumu Terajima) trudges from the left to the right of the screen through empty lots, down quiet streets and past rusted out industrial landscapes. Only through flashbacks do we find out that he’s been literally cut loose after the factory that he worked at was shut down. It’s certainly not the big bang, but it may feel like the end of the world for this man. With his eyes cast down at the ground in front of him he walks, lost in thought and we can only imagine shock, and when that wears off worry about what he will do now. And he keeps walking and walking and walking for minutes on end… and that the first thing you need to know about “The Blessing Bell”. It’s a very slow, deliberately paced film that’s in love with long sustained shots, which was kind of a surprise to me. I have to admit that this was the first Sabu film that I’ve seen, but from what I’ve read and people have told me his films are normally zany, blackly comedic, Keystone Cops-esque adventures. Well, that’s not to say there aren’t adventures in “The Blessing Bell”. 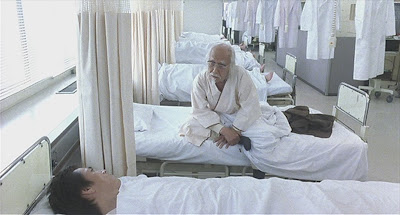 As our nameless protagonist continues his long walk he’s interrupted by encounters with various other lost souls: a yakuza boss who’s literally been stabbed in the back, a man (played by Isuji Itao) who had the courage to kill his wife’s lover, but not his wife, a hopeless single mother, the ghost of an elderly man in a hospital (a wonderful little performance by director Seijun Suzuki) and a suicidal salaryman. Our hero gets caught up as if by chance in each of their stories by running into a burning building, getting hit by a car and winning the lottery, but chance is the key word here in fact part of the film takes place outside a bar named “Chance”. One adventure comes so quickly on the heels of another that we start to question if there’s some crazy logic to this mixed up universe our hero has stumbled into.

About three quarters through “The Blessing Bell” though our man finally pauses… well he falls in a hole and for a moment he looks up and marvels at the expanse of stars stretching out above him, one little human, just a facet of this infinite universe. It’s a very effective scene and one that provides the turning point in the film, because the next morning the sun rises and, like in the writings of Stephen Hawking, our hero’s world stops expanding and begins to contract. For the first time there is a soundtrack in the film and Terajima’s trajectory reverses from left to right to right to left as he retraces his steps back to where his journey began and in the process crosses paths with the caharacters we’ve previously met.

While not for everyone “The Blessing Bell” will reward the patient viewer with a tall tale that may stretch believability, but remind us all of what’s important in our lives.