Reviewed by Chris MaGee
“Once upon a time there were two sisters, Ume-san and Kame-san…” It’s with this classic storybook beginning that filmmaker Mai Tominaga starts her feature film debut “Wool 100%” (2006), and like any good fairy tale it uses child-like whimsy and enchantment to address the dark secrets and longings in the hearts of adults.

Ume and Kame, played by screen veterans Kyôko Kishida and Kazuko Yoshiyuki, live in a mansion encrusted with junk. From floor to ceiling, across the lawn, covering the roof, there isn’t a square inch where they haven’t piled one of their finds: old lamps, torn futons, accordions, music boxes, plastic buckets, etc, etc. The elderly sister’s daily routine consists of heading out each morning to sunny suburban neighbourhoods and poking through the garbage piled by the curbs in search of even more treasure.

On the morning when we first meet them they manage to bring in a fairly good haul: a smiling wobbly doll and a microphone(?) and just as they are about to head home they’re literally tripped up by one last find, a length of red yarn leads them to a basket filled with balls of the stuff. The skip home happily and catalogue these new additions to their junk pile immediately; the basket of red yarn being given a prominent place in the middle of the dining room table. Later that night it’s from this room they hear what sounds like an intruder. 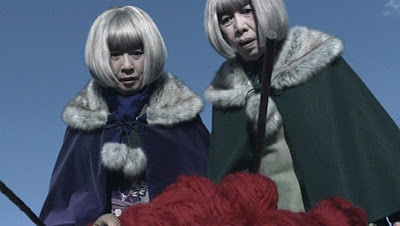 The intruder turns out to be a teenaged girl (played by “Nobody Knows” star Ayu Kitaura) who is maniacally knitting the red yarn into a sweater full of dropped threads, snags and frayed edges. As soon as he pulls it over her head she cries out in a voice that sounds like an air raid siren, “I have to knit it again!” Her yelling echoing throughout the house Ume and Kame wonder what they’ve got themselves into, and so do we.

Tominaga got her start as an animator, so this live-action debut is bursting with visual flair and wonderful attention to detail. The effect is dazzling, but puzzling, at least for the first hour. There is very little indication as to why these two old women are collecting junk in this mansion, who this girl and her red sweater is exactly and how the two fit together. Once we get past the hour mark though everything becomes clear, sort of.

I’d rather not give away the meat of the story that is revealed. Suffice to say that Tominaga uses the imagery of junk, a doll house, and of course the blood red yarn to explore issues of femininity, reproduction, loneliness and abandonment if not in a direct way then an obtuse kind of dream logic. It may take a bit of patience for average viewers, but fans of Jean Pierre- Jeunet, The Brother Quay, and Jan Svankmajer will love “Wool 100%”.
Posted by Chris MaGee at 9:06 AM