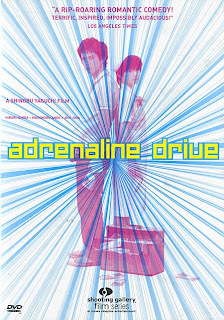 Normally I have expectations about a movie before I sit down to watch it - I've read reviews, heard recommendations, know the director, researched it through festival previews, etc. But occasionally you get to stumble across something where you go in totally blind...Your expectations then get set by the title, marketing and possibly a blurb or two. So when your film for the evening is called "Adrenaline Drive", its DVD cover looks like you're getting pulled into warp speed and you read that "A meek car rental employee and a mousy nursing student wind up an unlikely Bonnie and Clyde when fate drops a sack full of mob money at their feet.", perhaps you can be forgiven if you didn't expect a slow moving yet charming little romantic comedy.

The car rental employee (Suzuki) and mousy nurse (Shizuko) meet accidentally in the rubble of an explosion of a yakuza gang's house. He had been dragged there by the gang's boss after a minor car accident and she just happened to be near when the place blows up (due to a gas leak). After the ambulance they and the unconscious gang boss share crashes, our heroes seize upon the opportunity presented them and abscond with a large amount of yakuza money. They are pursued by the boss as well as a group of his bumbling gang. The general plot and resolution aren't difficult to predict, but it's the specific details and bits and pieces of the journey that make this film enjoyable. You know how it's going to end, but you aren't sure how it's going to get there. 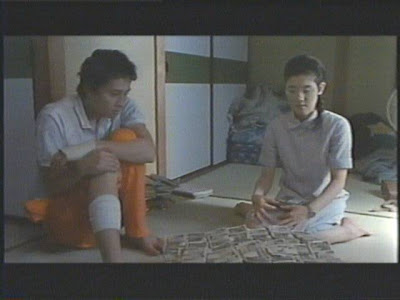 Both of the main characters are quite sympathetic and the love story between them, given the silliness of the premise, believable. What's interesting is that there's not a lot of dialogue between the two. The slow pace of the film and this lack of conversation gives much of the story a dream like feel and this complements some of the more ridiculous events quite well.

You likely won't find yourself doubled over in laughter at any point while watching this, but I found a rather consistent smile on my face throughout. The deadpan humour of character reactions to absurd situations is handled so well that you likely won't mind the film returning to it again and again. But the film's strongest points are the additional secondary characters - the head nurse who helps out the gang leader, the lothario thief with heart trouble, the six yakuzas in training who show occasional flashes of humanity and the invincible gang boss himself all add a great deal to the film. Many romantic comedies needlessly deal in cliches and stereotypes for their support characters, so it's very refreshing to see a film take full advantage of the screen time when our main characters aren't there. It adds interest and warmth to a film that already had it in spades.
Read more from Bob Turnbull at his blog.
Posted by Chris MaGee at 11:22 AM