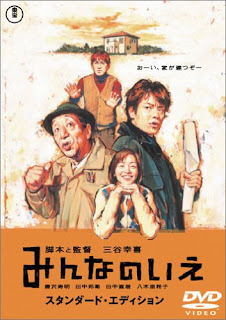 Koki Mitani's 2001 film "All About Our House" is an episodic tale of one couple's journey building their own house from the ground up. This is fertile ground for family conflict with lots of potential for humour, but even though the film tries for all of that, it pretty much fails across the board.
As the picture progresses, each major milestone of the house building process has its own chapter heading ("Plans Are Everything", etc.). This helps to keep things moving forward and to keep the viewer's interest level just above the surface. But the film just never gets further off the ground. The comedic timing is almost always off and the scenes are either over or underplayed (they never quite get the tone right). Anything attempted as drama, just ends up being maudlin. The acting throughout is a problem too - it's not quite as broad as say a silent keystone cops movie, but sure comes close sometimes in many situations that just don't require it. As an example, the character of the husband seems to want to project every emotion with a wide open mouth. Even the music is extraordinarily generic with faux happy jazzy music for some of the montage scenes and bright strings to indicate that things are going well.
But back to the story. The young couple secure an interior designer they like for the job of architecting their new house from scratch, but they ask her father to be the main builder. Both architect and builder have strong opinions which tend to be polar opposites. Dad is an old school builder and believes in large Japanese style rooms. The young architect wants to try new things (having front doors opening inwards, etc.) and hates any interference with his plans. Throw in the Feng Shui suggestions of the husband's mother while other family members poke their noses in and you end up with plenty of conflict. 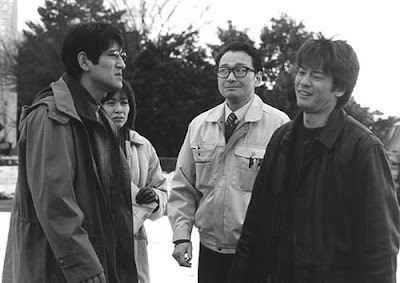 A major problem of the film, though, is this attempt at creating the tension between the architect and the builder. The father is extremely petty in ensuring that his way gets done even if it may not be what the young folks want for their house. Even after the father has a revelation that his daughter has never before asked anything of him, he continues with his ways - like that previous scene had never occurred. There are several spots where it appears that the architect and the builder have reached an understanding of each other and will work towards compromise, but then they fall right back into the same arguments. The young married couple are also an issue - she is whiny in just about every single scene while he doesn't have a subtle bone in his body. These aren't flawed characters - these are annoying characters.
"Sweet" is what they seem to be striving for here (the music immediately signals this) and even though it occasionally threatens to be genuine and I really wanted to let it win me over, it just never succeeds. It all has the feel of a made for television movie since there's not a lot of interesting shots or camera work here and much of the screen time is devoted to bland colours. But then again, the story doesn't really deserve anything more.
Read more from Bob Turnbull at his blog.
Posted by Chris MaGee at 5:48 AM