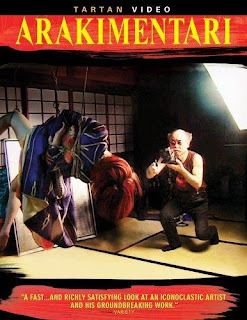 I nearly got into trouble watching “Arakimentari”, Travis Klose’s 2004 documentary about the Japanese photographer Nobuyoshi Araki. My wife had come home and saw a flash of a naked women bound and spread-eagled on the floor. “Hey! What’s this?!”

I had to explain fast about Araki, whose brilliant but iconoclastic career has encompassed over 350 books of photographs of mostly erotic subjects, but also portraiture, landscapes, and beautiful, poignant photo essays on his marriage to, and death of, his wife Yoko. Thankfully “Arakimentari” kicked into these other subjects as my wife settled in to watch with me. Image after image flashed across the screen, a wonderful way of illustrating how Araki is constantly mediating, making fun of, and devouring the world around him through the lens of his camera, or cameras as he seems to travel everywhere (karaoke bars, galleries, the Kabuki-cho district of Tokyo) with an arsenal of them, all the while laughing, gesticulating and profusely sweating in outfits that I’m sure Keith Richards would love to get his hands on. 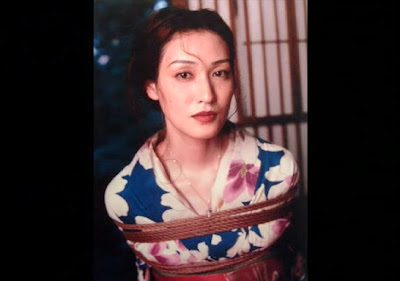 “What, is he some kind of clown?” my wife observed. It’s a good question. Araki reminded me of some kind of court jester strutting around a court of luminaries (Takeshi Kitano, Bjork, photographer Philip Kern are but a few of the admirers who appear in the doc) alternately praising the world of high art, but meanwhile openly making mincemeat of the Japanese obscenity laws that forbid the graphic depiction of genitals or pubic hair . Many of these admirers and colleagues readily refer to Araki as “a monster”; I mean how many world famous photographers do you know who do pick up work for a Naughty Housewives porn magazine? It’s this dichotomy which is presented, but in my mind isn’t thoroughly explored throughout the film.