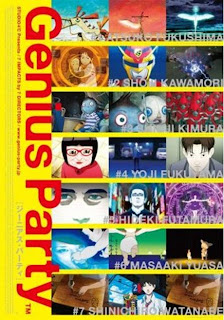 Let me start off the review by saying that Studio 4ºC is one of the most exciting animation studios in the world today. All you have to do is check out Masaaki Yuasa’s brilliant adventure into the after life and beyond “Mind Game” or Michael Arias’ manga adaptation “Tekkon Kinkreet” to see what I mean, but an even better way to get your feet wet in the waters of Studio 4ºC is through their 2007 omnibus film “Genius Party”. The title basic sets up what’s going on here; seven of the most gifted animators, both veterans and newcomers each get a chance to let their imaginations run wild, using every trick in their toolbox to produce seven beautiful and baffling short films. Of course the only way to do the project justice is to look at each of these seven films on their own, so here are capsule reviews of the seven unique worlds presented in “Genius Party”:

The titular first film in the omnibus takes us back to a mythical dreamtime peopled intelligent spherical skulls and an avian-like shaman who’s on a mission to unlock the magic sealed in him/ her self and the landscape. Veteran animator Atsuko Fukushima, who has worked on such well known anime features as “Akira”, “Robot Carnival” and Kiki’s Delivery Service” brings a propulsive energy to this, her directorial debut. The pounding music, the exciting visuals and wordless narrative are a perfect start to the film and gets our blood going for the next short.

Shoji Kawamori adapts the heavily mechanized science fiction of his “Macross” and Escaflowne” anime series into an ingenious story about how a child’s imagination can literally save the world. A snot-nosed 6 year-old boy in 1960’s Shanghai discovers that the crystal wand that fell from the sky can bring his childish drawings to life, but what he doesn’t know is that the wand is being pursued not only by humans from 300 years in the future, but also a massive alien army. The action in “Shanghai Dragon” is absolutely top notch, but its how our boy hero uses the bottomless well of his imagination to transform himself into a masked tokusatsu crusader from TV that is the real joy in this film.

An undead child in a zombie city finds himself in possession of the last thing you’d want in a zombie city: a live frog. The boy has to call in the help of his other spooky friends to safely return froggy to the land of the living before the zombie police throw them all in the clink. First time director Shinji Kimura uses both 3D computer graphics with traditional 2D animation to give his gothic characters the look of being living crayon sketches. The world of giant fish, tall spiraling buildings and tricycle riding police was one that I immediately fell in love with and could have happily sat through an entire feature film of. For me Shinji Kimura is the one name in “Genius Party” that you should really look out for.

First timer Yuji Fukuyama takes the idea of the doppelganger and uses it to enhance the awkwardness and unease of adolescence in “Doorbell”. A young man walks home from school only to find that his double has taken his place not only at home, but at his best friend’s house. In danger of being locked out of his reality by these different versions of himself the young man has to race against time to get to the only place he thinks he’ll be safe, his girlfriend’s apartment. While I wasn’t expecting or wanted to have the reasons behind these split selves spelled out for me it would have been nice to have had at least some ambiguous clues as to what exactly was going on. Instead we just get teen angst.

A journey into cyberspace or a peek into the mind of god? It’s hard to tell what exactly is going on in Hideki Futamura’s look at one mans trip through an electronic and spiritual kaleidoscope, but one thing is certain; the director should have heeded the title of the piece and “limited” himself a bit. The animation in “Limit Cycle” is definitely exciting, and I believe that the fractured imagery would have been enough to get some sliver of meaning (or at least mood) across, but for some reason Futamura lays on a ponderous and pretentious voice over that drones on about god and reality and makes the philosophical ramblings in Mamoru Oshii’s “Ghost in the Shell: Innocence” sound like “Fun with Dick and Jane”. My least favorite of the bunch.

You always get the personal quirks of the reviewer when you read a movie review, so keeping that in mind I found Masaaki Yuasa’s “Happy Machine” kind of disturbing. The animation is beautiful, being at once full of detail but sparse in composition and Yuasa’s jaw dropping flights of imagination are on full display, but ultimately “Happy Machine” is built around the story of an abandoned baby, a concept that I find very uncomfortable, especially when it’s used not for sympathy but for laughs. Although the ending redeems things a bit I was disappointed that Yuasa’s contribution left me with such a bad taste in my mouth.

The folks at Studio 4ºC saved the heavy hitter for last. Shinichiro Watanabe is known for his action-packed creations “Cowboy Bebop” and “Samurai Champloo”, but with “Baby Blue” he takes things down several notches and mines his memories of adolescence to tell a bittersweet love story. A young man and woman play hooky from high school so they can make a trip out to Shonan Beach so they can bury a live hand grenade that they stole years before. “Baby Blue” is the film that I wished Makoto Shinkai’s “5 Centimetres Per Second” was; a real look at teen love and loss played out as a long train ride, but without the giant-eyed anime character designs and the sugary sentiment.
Posted by Chris MaGee at 3:49 AM