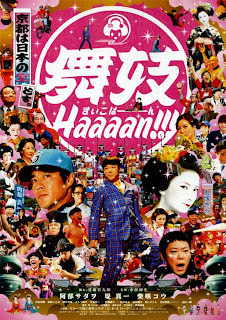 Ever since a kindly maiko took pity on a young Kimihiko Onizuka after he got lost in Gion during a high school trip his life has revolved around these gorgeously attired, porcelain-faced apprentice geisha. We catch up with Onizuka, played by Sadao Abe, at the beginning of Nobuo Mizuta’s 2007 manic comedy “Maiko Haaaan!!!” now 12 years older, but not a hell of a lot wiser, he’s an employee of an instant ramen bowl company, but he doesn’t work much, spending most of his time at the office updating his website dedicated to the womanly wiles of maiko. In fact he’s so busy posting photos and carrying on ferocious flaming wars with someone named “KiNai” that he totally ignores his girlfriend and co-worker Fujiko (Kou Shibasaki). His company decides it can’t deal with his dead weight anymore so they give him a demotion, transferring him to the hardship post of the company, “the topping factory” where they make the soup bowl garnishes; but Onizuka hardly sees it as a step down. The “topping factory” is in Kyoto, the epicenter of geisha culture in Japan! Faster than you can whip up a steaming bowl of instant ramen Onizuka starts speaking in a Kansai dialect, dumps Fujiko and heads west, ready for his big chance to enter into the flower and willow world of his dreams.
As I watched “Maiko Haaan!!!” I couldn’t help recalling my time in Kyoto and the insanity that seemed to set in amongst the tourists as they stalked, spied and did double takes trying to get a photo of the elusive maiko that breezed through the darkened streets of Gion. It was witnessing that mania that made Sadao Abe’s shrill, wildly energetic performance as Onizuka even that more hilarious. Who’d have thought that he’d have such a hard time just getting in the front door of a geisha house? At one place after another he’s turned away, “No first timers allowed,” he’s told, but Onizuka is a man on a mission and what follows is his own one man crusade to steal the heart of a real maiko. Along the way he has to win the respect of his boss, a regular at the geisha houses, by creating the perfect bowl of instant ramen, become a baseball star to beat his online nemesis “KiNai” who’s revealed to be a boozing baseball player named Kiichiro Naito (Shinichi Tsutsumi), and get introduced to the most beautiful maiko he’s ever seen… who’s also Onizuka’s ex. Fujiko has her own mission and follows Onizuka to Kyoto to become a maiko to win him back. 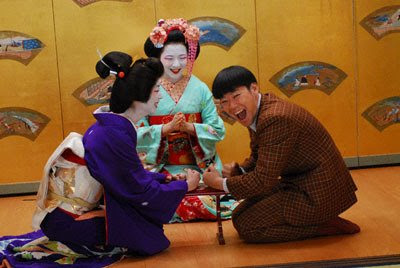 Kankuro Kudo, the screenwriter behind such loopy films as Takashi Miike’s “Zebraman”, Fumihiko Sori’s “Ping Pong” and his own film “Yaji and Kita: The Midight Pilgrims” plays things a bit more conservatively with the script for “Maiko Haaan!!!” including only one musical number (!) and playing up the love triangle between Onizuka, a maiko named Komako (Saori Koide) and an uncharacteristically reluctant Naito. The plot twist that caps this off (which I obviously won’t reveal here) unfortunately leads “Maiko Haaan!!!” down the familiar romantic comedy path, but television director Nobuo Mizuta does his best to balance the zaniness with all syrup.
Despite the failings of the last third “Maiko Haaan!!!” still delivers some really good chuckles and it should impress fans of other light, off-the-wall comedies like “Kamikaze Girls” and “Otakus in Love”.
Posted by Chris MaGee at 11:36 AM