The fish are jumping for upcoming "Tsurikichi Sanpei" live-action film 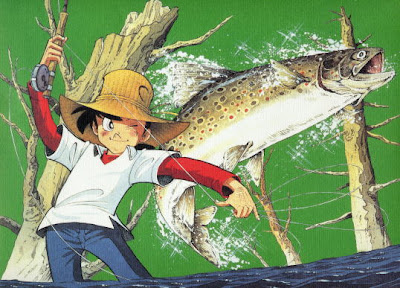 I went fishing once, had one nibble, but caught nothing and got worm guts all over my t-shirt from baiting the hook. Suffice to say I was not a very good fisherman. Now, on the other end of the spectrum there's Mihira Sanpei, a simple country boy with uncanny fishing talents and the main character of Takao Yaguchi's manga "Tsurikichi Sanpei". Sanpei's adventures were serialized in Shonen Magazine from 1973-1983, were turned into an animated TV show which ran for three seasons in the early 80's and now, according to a report posted at Tokyograph is going to be getting the live-action treatment in a film to be directed by Yojiro Takita and starring Kenta Suga (Always: Sunset on Third Street) as the boy wonder of the bait and tackle.

It's been a long journey from the pages of Yaguchi's manga to the big screen for "Tsurikichi Sanpei". Apparently Toei, who are producing the film, have played with the idea of making it into a feature film since it's debut in 1973, so the question is "why now?" The execs at Toei, like the execs at Shochiku, are trying to make lightning strike twice by creating the 21st century equivalent to the longest running film series in history "Otoko wa tsurai yo" or more commonly known as the Tora-san films. Shochiku didn't have the blockbuster success they were hoping with their Tsukiji Fish Market based "Tsukiji Uogashi Sandaime (The Taste of Fish)" so now Toei is trying it's luck with "Tsurikichi Sanpei". I find it extremely odd that the studios keep trying to go with films based on seafood to come up with the next Tora-san series. Toei has the young actor from "Always: Sunset on Third Street)" and they've got it's screenwriter, Ryota Kosawa as well, plus "Always" has already spawned a successful sequel, pulled in billions of yen at the Japanese box office and racked up dozens of awards. Um, hello?! If you're looking for the next Tora-san films stop mucking about down at the fishing hole and make some more "Always" films. Duh!!!