REVIEW: Into the Picture Scroll: The Tale of Yamanaka Tokiwa - Sumiko Haneda (2004) 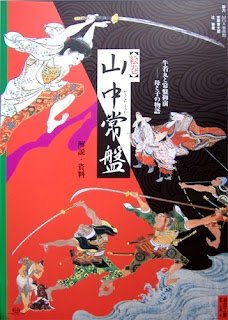 Hokusai, Utamaro, Hiroshige; when we think of Japanese art, specifically the ukiyo-e, or "pictures of the floating world" these are the names that come to many people's minds. If someone where to name drop Matabai Iwasa though how many people would exclaim, "Yes! Iwasa! Genius!" I have to be honest and say I wouldn't be that person, or wouldn't have been one of those people before seeing Sumiko Haneda's ingenious film "Into the Picture Scroll: The Tale of Yamanaka Tokiwa" (2004), but thankfully that's changed and hopefully this film will change that for many more people as well.
Iwasa (1578-1650) was born into a noble family, but instead of taking up the sword took up the brush instead. Although schooled in the traditional Tosa School style of Japanese painting Iwasa's works were more lively and much more narrative than the flat, stylized and mostly decorative paintings of his time. The best example of this are his twelve emakimono (picture scrolls) that illustrate the story of the young general Minamoto no Yoshitsune, whose boyhood name was Ushiwaka-maru, and his mother Tokiwa who was murdered on her way to be reunited with Ushiwaka at Kurama Temple in the Hiei Mountains northeast of Kyoto. It's these scrolls, totalling 1500 metres in length, that are higlighted by Haneda, one of Japan's most highly respected documentary filmmmakers; but to call "Into the Picture Scroll" a documentary (which some people have done) would be inaccurate. 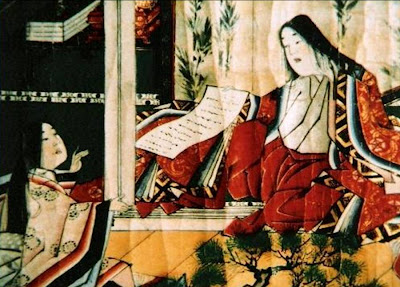 What Haneda does in the film which is so original is to explore similarities between motion pictures and Iwasa's scrolls by filming the story that he painted on the parchment 400 years ago. Using extreme close-ups and precise framing Haneda's camera captures Tokiwa and her handmaiden as they journey by foot from the old capital of Kyoto through the mountains and to the town of Yamanaka. It's here where a group of bandits get word that a noblewomen is staying at the inn and in the dark of night descend on Tokiwa and her servant, robbing them of their possessions and brutally murdering them. It's a story worthy of a modern anime film and that is very much how "Into the Picture Scroll" plays out. Barring the occasional cut away to live-action modern day footage of Tokiwa's route we are immersed in the at times expressive and beautiful and often gruesome and gory world of Iwasa's scrolls; and like any good anime the murder of Tokiwa sets into motion a plot filled with intrigue, trickery and absolutely over-the-top violence as the 15 year-old Ushiwaka seeks revenge against the bandits for his mother's death.
The creation of what is essentially this modern anime film using antique source material is a true tour de force, but I found myself so immersed in the anime experience that Haneda created with her skillful shooting and editing of Iwasa's static painted images that when she introduced the traditional joruri narration with shamisen accompaniment I found myself taken out of the experience a bit. While the use of this narration and music is a totally logical choice given the subject matter I thought that a more contemporary soundtrack (not anything so severe as techno or something like that mind you) would have bridged that gap between the traditional paintings and anime even more.
If you can get past the highly mannered joruri narration "Into the Picture Scroll" will reward you with a brilliant illustration of how the Japanese traditional artists like Matabai Iwasa paved the way for the likes of Mamoru Oshii, Katsuhiro Otomo and Hayao Miyasaki.
Posted by Chris MaGee at 9:29 AM