What film got you hooked?

A continuing feature that asks prominent cinephiles "What film got you hooked on Japanese cinema?"


Gate of Flesh by Jason Gray 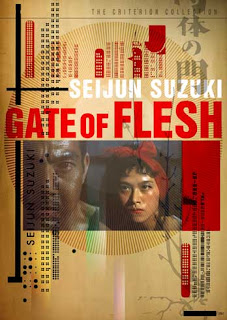 As a six year old watching Godzilla and Gamera movies on Sunday afternoon TV, I was mesmerized. They were somehow different from the likes of "Gorgo" and "One Million Years B.C." The human characters intrigued me as much as the kaiju. There was a Japanese boy who lived in my building, and was also in my class. Yoshiaki was his name. His bedroom was full of fantastic robots and monster figures that were leagues ahead of the junk I had. I also lived next door to two Japanese sisters who were maybe 8 and 9. At my age, they were Goddesses. These early impressions made it easy for me to recognize things from Japan, at a time when anything and anyone from Asia was regarded as "all the same".

Fast forward to fall 1993. After spending the 80s and early 90s immersed in Shaw Brothers kung fu, Jackie Chan action and the new wave of HK directors, I was getting acquainted with classic Japanese movies at film school and especially at Cinematheque Ontario. (Head programmer James Quandt is so good at what he does that he was presented a Japan Foundation culture award, meeting the Emperor and Empress in person.)

There was a retrospective of a director named Seijun Suzuki, whom I had never heard of. "Gate Of Flesh" was the film. It was unlike anything I had ever seen. Joe Shishido was an outrageous leading man. The color-coded prostitutes were Goddesses of a different kind. It stimulated my eyes, my mind, and my groin. I had that same strange feeling I had when I was little -- I had wanted to know more about the land that spawned these visions.

Five years later, I came to Japan for the first time. A decade later and I'm still here. While writing this text I checked the current Cinematheque Ontario programme out of curiousity: there's plenty of Kurosawa, Imamura and yes, Suzuki. May they continue to inspire and intrigue!

Jason Gray is the Japan correspondent for Screen International as well as contributing articles to The Japan Times, MidnightEye.com and various other publications. He currently lives in Tokyo where he works on script translation and subtitling of such films as “K-20: Kaijin niju menso den”, “Flavor of Happiness (Shiawase no Kaori)” as well as acting in small roles in “Tokyo Sonata” and “Linda, Linda, Linda”.
Posted by Chris MaGee at 9:24 AM

Enjoying your writing very much.