Isao Takahata returns to feature filmmaking after a decade 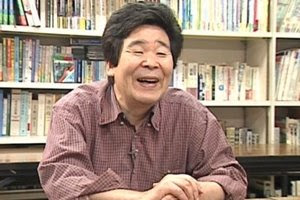 While I don't universally love the films of Isao Takahata as much as thge films of his Studio Ghibli partner Hayao Miyazaki I do count his "Grave of the Fireflies" and "Pom Poko" as tow of my favorite animated films, so it was with great happiness that I saw that the rumours of a new film from the anime master aren't rumours at all. Word comes from Nausicaa.netvia the Anime News Network that Takahata is moving ahead with production on a new animated feature film, his first in a decade. Studio Ghibli president revealed as much in an interview with Nikkei Waga Maga, but declined to discuss any more details.

Could this be the rumoured teaming up between Takahata and Hayao Miyzaki's son Goro that was mentioned back in February? Will it be based on Japanese lullabys as we reported back in March? Withut any firm production timeline or tentative release date I guess we'll just have to keep waiting and wondering. I hate waiting and wondering!
Posted by Chris MaGee at 8:46 PM