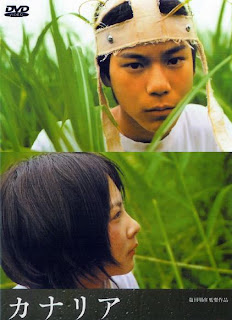 There have been many cinematic attempts to exorcise the shock that the 1995 Aum Shinrikyo sarin gas attacks on the Tokyo subway system caused in Japan . Filmmakers as varied as Tatsuya Mori, Shinji Aoyama and Hirokazu Koreeda have all wrestled with who to blame and how to heal in their respective films (both documentary and fictional) “A”, “An Obsession” and “Distance”, but one film that was released after all of these, ten years after the attacks in fact, is in my mind the most perceptive and powerful of the bunch: Akihiko Shiota’s “Canary” (2005). Instead of viewing the attacks through the eyes of adult victims, as in the surviving family members in “Distance”, or the adult members of Aum Shinrikyo as in “A” Shiota makes the choice of highlighting the most vulnerable group in the tragedy, the children of the cult members, and in the process makes some very pointed comments about contemporary Japanese society.
12 year-old Koichi (Hoshi Ishida) is the proverbial canary in the coalmine, pulled out of the chaos of the disbanded Aum-like cult Nirvana by child welfare authorities after the group unleashes a similar poisonous gas attacks on unsuspecting civilians. Angry at the child welfare workers who he views as judgmental heathens while at the same time furious at and hurt by his mother Michiko (Miyako Koda) for having dragged his little sister Asako and him into a supposed religious life only to abandon them Koichi is violent, contradictory and almost feral, the kind of boy who will be destroyed by the system if he’s left to be shuttled from foster home to foster home. Koichi has already had enough of this sort of treatment at the hands of the abusive leadership of Nirvana, so boxed into a corner he escapes, determined to liberate little Asako from the custody of her maternal grandfather in Tokyo and somehow make whole his fragmented family once again. 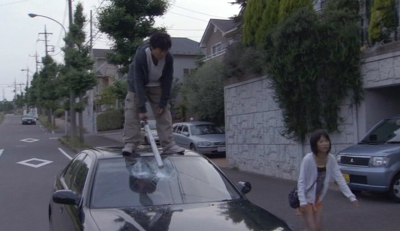 With his mother on the run with the other ringleaders of of the attack Koichi sets out on his own from the suburbs of Kyoto to the capital, but he's not alone for long. Along the way he crosses paths with Yuki (Mitsuki Tanimura), also 12 years-old and also a troubled child. With both her abusive parents having passed away Yuki has grown up fast, too fast, making ends meet through "subsidized dates" with grown men. It's after such a date with an elderly man that Yuki gets enough money and agrees to accompany Koichi on his quest. What follows is an often sad, but sometimes hopeful road movie peopled with Yuki's murderous clients, a bitter lesbian couple and an array of mourning ex-Nirvana members and shot through with recollections of the forced isolation and systematic abuse that Koichi, Asako and the other Nirvana children suffered in the name of the cult's guru.
There are a number of things that make "Canary", for me the most successful of the explorations of the Aum Shinrikyo attacks. First off the performances delivered by Shiota's cast are all top notch, but the real revelation for me was the debut performance of Mitsuki Tanimura as Yuki. The then 14 year-old actress gives a performance that encompasses world weariness, rage and heartbreaking hints of youthful innocence as in the scene where a kindly grandmother folds a paper crane for the awe struck Yuki.
The thing that really set the film apart for me though was that Shiota wasn't so much making a film about the whys and wherefors of the sarin gas attacks, but looking at what happens when we as adults fail our children when we abandon them for what we feel to be the normally noble goals self-fulfillment, personal happiness and even spiritual revolution. In this way Koichi and Yuki's story has much more in common with another Hirokazu Koreeda film, 2004's "Nobody Knows". "Canary" transcends the true life basis of it's plot to become a universal story of responsibilty and how our own childness can force the next generation to grow up far too quickly.
Posted by Chris MaGee at 9:39 AM