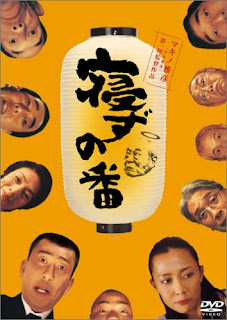 When you think of traditional Japanese storytelling many of us gaijin would immediately have visions of refined noh, kabuki or bunraku plays using the traditional and highly mannered jōruri narration accompanied by the twang of the shamisen, but even though these are narrative arts they’re more theatre than pure storytelling. No, to get a good idea of traditional Japanese storytelling you have to move away from the staid and formal affairs of the theatre and go for something a bit more outrageous, naughty and of course fun. I mean how many kabuki plays do you know where songs are sung about someone so busy having anal sex that they don't have time to fart, or how a woman's breasts are the "doorbell" to her "honeypot"? Probably not that many, but in the world of rakugo things get a little more down and dirty and it's this traditional comic storytelling that forms the basis for veteran actor turned director Masahiko Tsugawa's debut film "Nezu no Ban".
Rakugo, which translates to "fallen words" is the traditional stand-up comedy of Japan, with its first official mention taking place in late 18th century, but whose roots probably goes back as far as the 13th century. The set up is simple: one man (very rarely one woman) sits center stage wearing traditional kimono and with only some simple props (usually a fan and a hand towel) and their skills as a storyteller relate comic monologues that range from the tame to the racy stories mentioned above. It takes two to four years of training for a deshi or apprentice rakugo-ka (rakugo performer) during which time the apprentice trains not only in elocution, memorization and delivery, but in many cases also run errand and keeps house for the rakugo master. A very close bond is created between master and pupil as is the case with Shomantei (Hiroyuki Nagato) and his stable of apprentices who, as "Nezu no Ban" opens, are crowded around their master's deathbed, but almost immediately Tsugawa uses their grief to tell a hilarious rakugo story. 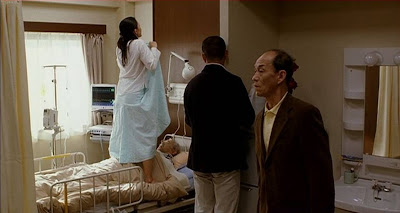 Shomantei's apprentice Kyoji asks him if he has any last wishes to which the master mumbles that he wants to see a soso, the Kyoto slang for a woman's genitals. Devotion overrides shock and soon the group of pupils are trying to find out where to find a woman willing to let this dying old man take a peek at her privates. All fingers point to Hashita (Kiichi Nakai) whose young. beautiful wife Shigeko (Yoshino Kimura) is almost as devoted to Shomaneti as his pupils are. After a raucous fight and some even more raucous make up sex Shigeko agrees. At the hospital she balances on the dying man's bed and lifts her skirt so he can have one last good look at a real woman. Eye's wide and mouth open minutes after the spectacle is over Shomantei is asked by Kyoji how it was. "I told you I wanted to see outside (soto)!" he yells and shortly thereafter dies.
It's these kind of bawdy stories that dominate "Nezu no Ban" as at first the group of pupils and Shomantei's son played by the wonderful Ittoku Kishibe gather at the master's funeral and spend the night keeping vigil over his corpse by telling stories and then go on to attend other funerals for members of the group, again keeping vigil and telling even more stories: the time when Shomantei wanted his pupils to score him some pot in Hawaii and how they unwittingly all got high on lawn clippings; how Kyoji seemed to be cursed with one disaster after another following him from show to show; and the list goes on.
With the funerals and vigils Tsugawa picks a very nice framing device for all these stories, one that never feels forced or contrived; and although this is definitely not a film for the kids the language is the most graphic aspect of what ends up being a very tame film. While not for the easily offended the stories told by Shomansei and his pupils are offset by the genuine affection the characters have for each other and in the end "Nezu no ban (Wakeful Nights)" comes off feeling warm, earthy and, yes, just a bit naughty.
Posted by Chris MaGee at 9:43 AM