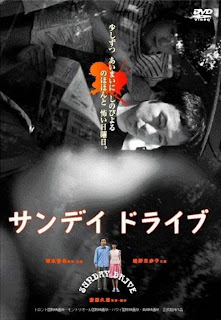 Our secrets possess an untold amount of power. From the little white lies we tell friends and family to grease the wheels of our day to day routine to the moments of transgression that frighten us because they seem to have been performed by another person our secrets, if they were given voice or action, could either minorly inconvenience us or rewrite or entire existence. What would these seismic shifts look like, and if our secrets came out what kind of people would we be? Ruined or reinvented? It's what happens when our lies and secrets come into the light of day that director Hisashi Saito tries to explore with only limited success in his low-budget 1998 feature "Sunday Drive".
First off I must stress that even though "Sunday Drive" was produced by Shinya Tsukamoto and released through his Kaijyu Theater company that you will find nothing in common here with the frenetic, industrial pummeling that one associates with his "Tetsuo the Iron Man" or "Tokyo Fist". Here Tsukamoto stays in front of the camera playing Okamura, the manager of a small video store with a desperate crush on his employee Yui in Saito's slow, deliberate morality play; but before we're introduced to Okamura we meet Yui herself (Miako Tadano) and her live in boyfriend Shinji (Takumi Tanji). It's these two that provide almost a preamble to the subjective reality of half-truths and secrets to follow as Shinji questions whether Yui has cut classes again. She tells him that she has and tells him the excuse she gave her teachers to get out of attending, but already we get a feeling that nothing that Yui is saying is the truth and that she may be concealing things from Shinji. Then again, she's not alone. 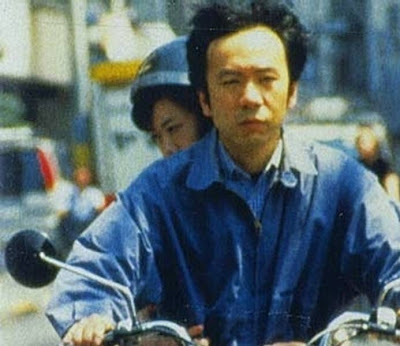 Jump ahead to the video store, the realm of Okamura, because frankly it doesn't seem that he has much of a life outside of it. While he's planning a BBQ/ camping trip for his staff he's given privildged information by Shinji: he's slept with another woman, and he swears Okamura to secrecy. "Yui would kill me if she found out," he tells his boss. We already know Okamura's feelings for Yui, so the tension that is built up in the ensuing slow, almost static scenes becomes unbearable, building up our expectations for what Shinji's confession will unleash. Here Saito channels one of his obvious influences, Takeshi Kitano, by showing us a one take scene of Okamura leaving the store to get beer for the BBQ only to encounter Yui standing out front. "Did you hear?" he asks her to which she replies yes and we immediately jump to Shinji laying on the floor of the store, a pool of blood spreading underneath his head. What happened? Who struck the killing blow? Yui or Okamura? The dilemna for the rest of the film is set up, but unfortunately Saito never really follows through.
Believing Shinji to be dead Okamura and Yui grab the food that was bought for the staff BBQ and go on the run, taking Shinji's brother's van and making plans to disappear to Bolivia together. Shinji's death it seems has liberated them, allowing Okamura to finally reveal his secret love for Yui and for Yui to escape from what was obviously a stagnant, unhappy relationship, but instead of providing scenes of joy and energy Saito continues the molasses-like pacing, no longer creating tension, but boredom. We're treated to scene after rambling scene without anything much going on before Okamura finally receives a phone call that ups the stakes for Yui and him, but that call comes a little too late to save "Sunday Drive".
Don't get me wrong. I love slow films, but "Sunday Drive" forgets to explore these potentially fascinating characters, so that when the film reaches its rather abrupt ending we're no closer to discovering exactly who Okamura and Yui (and Shinji for that matter) are despite the fact that we've just seen the repurcussion of their deepest secrets being revealed.
Posted by Chris MaGee at 9:07 AM