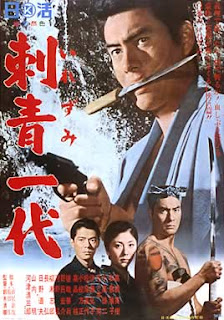 In order to help put his younger sibling through art school, Tetsu has become a low level yakuza (and has been adorned with identifying tattoos). By command of the Owada family, he assassinates the head of the Totsuka clan. With the job complete, another member of the Owadas tries to clean things up by killing Tetsu, but he fails in the attempt and is in turn killed by Kenji - Tetsu's younger brother who witnessed everything.
So begins Seijun Suzuki's 1965 film "Tattooed Life". Like many of Suzuki's films of the late 50s and 60s, the story itself is not overly complicated or original (stock themes such as destiny, loyalty and sacrifice run through it) - it's the style and methods of telling the narrative that grab the attention. Suzuki liked to play with the rules, so he developed little shorthand ways of moving the plot along and avoiding long sequences of exposition. He might edit a scene in an unexpected way or drop in a totally out of context image and it would impart the information you needed to know - just not necessarily in the way you would normally receive it. For most of "Tattooed Life" these techniques are kept to a minimum...But the last 15 minutes are an explosion of colour, violence and a marvel of creativity. 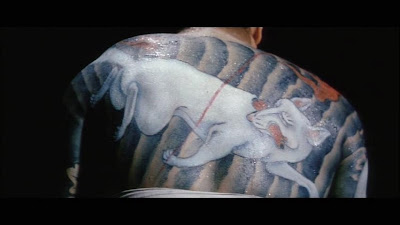 I'm leaving out the story though...It's actually a pretty decent tale - after the opening scenes the brothers decide to escape to Manchuria, end up stuck in a fishing port on the sea of Japan and fall in love with a pair of sisters (the aggressive Midori persues a reluctant Tetsu while Kenji is smitten with the older Masayo - the wife of the construction boss for whom they work). But Tetsu knows no good can come from sitting still while their past catches up with them. He won't even let Midori see his body because of the tattoos - the markings that have essentially set the destiny for him and his brother. The brothers fight, reconcile and make a final attempt to escape before the final act. It feels like Suzuki has been saving it all up for that last stretch and he just can't hold it back anymore. Camera angles become severe, rooms and characters get bathed in saturated colours (guess what red signifies?) and the pace quickens. Suzuki opens the floodgates and emphasizes the emotional high point of the film.
It's really a joy to watch.
Read more from Bob Turnbull at his blog.
Posted by Chris MaGee at 9:36 AM