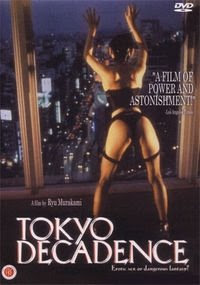 Reviewed by Chris MaGee
The pedigree of “Tokyo Decadence” (1992) the story of a Tokyo S&M prostitute is cinematically and culturally impeccable. Our descent into this seedy and harrowing world was directed and written by Japanese novelist Ryu Murakami (Coin Locker Babies, In the Miso Soup) who also penned the screenplays for “Love & Pop”, “69”, and a little film you may have heard of called “Audition”. The soundtrack was composed by the ubiquitous Ryuichi Sakamoto who scored such well known films as "Merry Christmas Mr. Lawrence", "The Last Emperor", "The Sheltering Sky", amongst dozens of others. The lead actress Miho Nikaido has starred in a number of films directed by American indie icon Hal Hartley, who she is in fact married to. So with all of this in its favour you’d think that “Tokyo Decadence” would be a rare and fascinating film. Well, it is… but in the same way that watching someone suffer a slow motion nervous breakdown would be rare and disturbingly fascinating.
When we first meet 22 year-old Ai, she’s being strapped down in a Tokyo hotel room, gag in mouth, eyes blindfolded, being injected with drugs by a man who beseeches her to “trust him”. This initial image was jarring enough that it took me until the slow drag through the opening credits had finished to catch my breath again at which time we’re reintroduced to Ai. Conservatively dressed with a Louise Brooks page boy haircut she’s a quiet, superstitious young woman who visits psychics, spends her time learning sign language simply because she thinks it’s beautiful and who believes that she has no talents whatsoever. This is the first fatal flaw of “Tokyo Decadence”. Ai (which loosely translates as “love” in English) isn’t so much a character, but a cipher, at least for the first two thirds of the film during which we follow her from call to call in various anonymous Tokyo hotel rooms. From a coked up business man who gets his kicks through humiliation, to a man who wants to force himself onto a dead body, in his usual unflinching style Murakami forces us to watch more and more disturbing scenes, some of which I’d very much like to forget. All the while Nikaido plays Ai as confused and understandably frightened by what she’s forced to witness and endure yet totally compliant to these men. And in the biggest let down Sakamoto’s score sounds... well... like it should be in a porn film. 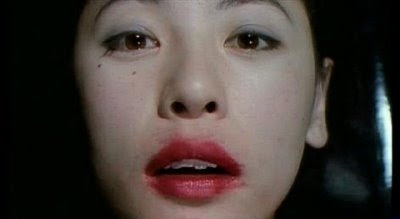