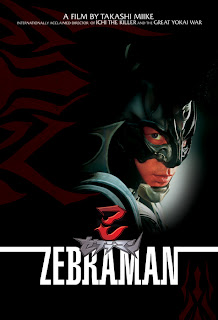 Takashi Miike, at one time one of the most prolific directors in the history of the known universe, has, over the last few years, shifted gears. While still outputting several films a year, the quantity has been greatly reduced, and the quality and content has shifted. Gone are the days of rushed, video market gangster movies. The self-proclaimed hack, while still retaining his subversive, genre-bending edge that made him famous, has ventured into the territory of broad, mass appeal. While I imagine this is a decision based on the fact that it allows him to switch between commercial films that pay the bills and smaller, more personal projects that don’t, it has given him a chance to venture into uncharted waters. Zebraman is definitely a movie that was made to pay the bills, and like One Missed Call and The Great Yokai War, which also fall into the same category, it still remains uniquely Miike.
Zebraman tells the story of Ichikawa , a dysfunctional elementary school teacher who is neither respected at home or at work. His family life is in shambles. His son, who obviously resents him, is beaten up repeatedly at school and teased by his fellow students because of his weird father. His wife is having an affair. And his daughter may or may not be a teenage prostitute. Even his fellow teachers view him as an oddball, as he fails to pay attention at faculty meetings or even to students during class. Most of this derision towards him is not without cause, however, as Ichikawa has an unhealthy obsession with Zebraman, a superhero TV show from the 70’s that was cancelled after only seven episodes. Ichikawa spends all his time drawing, dreaming, and dressing up as Zebraman, his only escape from his miserable life. Things change when Asano, a boy confined to a wheelchair, transfers to Ichikawa ’s class. Asano also has a love of Zebraman, and the two quickly form an unlikely bond. At the same time, the local crime rate goes through the roof as a man with a lobster mask begins killing the cities’ citizens. Asano and Ichikawa realize that the Zebraman TV show was no ordinary TV show, but a premonition of the future! Now all the world needs is Zebraman! 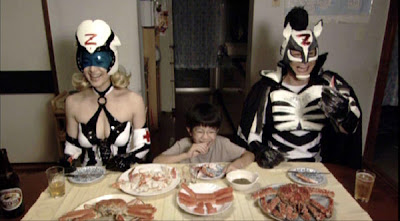 Zebraman will not please everyone. It is, along with One Missed Call, probably one of Miike’s most mainstream films to date. The comedy is subtle, subdued, and not nearly quite as outrageous as one would expect from Miike. The story plays itself out as a melodrama, moving at a languid pace. It is, essentially, Visitor Q (Miike’s stroke of genius) for a younger audience. It uses the same set-up, with the visitor replaced by Asano. In both films, the father is completely self-absorbed and clueless, the son is abused at school and the daughter is a prostitute (although this is only hinted at in Zebraman). It also seems to be almost a precursor to Sukiyaki Western Django, in that both films deal with fan boys and their reactions to adaptations and remakes. In Zebraman, it’s almost a stab at the very people that would seek the film out, as Ishikawa is essentially a superhero Otaku, who is so absorbed by Zebraman that he is completely at odds with the rest of the world. Whereas Sukiyaki dealt with the nature of remakes and the idea that as long as they are created with love, all is okay, here, Miike deals with fan boy obsession and the possessive nature they develop towards their chosen love. The film culminates with the realization that while the script of the show is set, what happens in the essential remake of Zebraman in Ishikawa’s life doesn’t matter, as long as the character believes in himself and what he is doing. While the message is sappy, the film is still very entertaining, with a solid performance by Sho Aikawa and a refreshing change of pace for Miike. While it is by no means groundbreaking, it will still make you smile.
Read more by Matthew Hardstaff at his blog.
Posted by Chris MaGee at 9:16 AM