Akira Kurosawa: With brush in hand 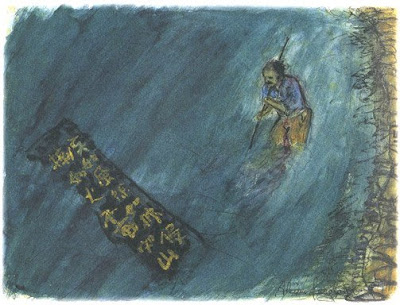 On Friday I told you about the exhibition of paintings and drawings by Akira Kurosawa that is taking place in Hollywood this fall as part of the Motion Picture Arts and Sciences retrospective of the master filmmaker's works, so what better time than to showcase some of Kurosawa's artwork here on the blog.

As a child it wasn't film, but painting that capitivated the young Kurosawa. He left the obsession with movies to his older brother Heigo who worked as a benshi, a performer who would narrate silent films in theatres. While Heigo gave voice to this new world of moving pictures Akira studied at making static, but beautiful painted works. He was an extremely gifted student, so much so that at the young age of 18 his paintings were accepted into the Nika Exhibition, a prestigious annual showing of artists from across Japan, but Akira's dream of being a famous artist would never come to pass. In the next few years financial concerns and the suicide of Heigo (as well as the deaths of his other two siblings) led Kurosawa into studying as an apprentice director at PCL Studios (that would eventually be renamed Toho). Despite his new career as a filmmaker Kurosawa never abandoned his brush and easel and throughout the years continued to commit his visions to canvas, often in preparation for committing them to celluloid. The most famous story of this is during the late 70's, when obtaining funding for his projects was becoming increasingly difficult for the director, Kurosawa produced painting after painting of a film that he had plotted out in his head. It was only after George Lucas and Francis Ford Coppola helped finance the project, "Kagemusha", that Kurosawa's story could be realized.

For those interested in the artistic roots of one of the founders of modern cinema head over to Akira Kurosawa: Drawings, a site run by the estate of the late director that markets reproductions of his paintings and drawings. Due to copyright concerns most of the images have a transparent "sample" plastered across them, but the images included give you a pretty good idea of Kurosawa's painterly style. After seeing these I can easily see why Kurosawa featured Vincent Van Gogh in his 1990 film "Dreams".

Enjoy, Everyone!
Posted by Chris MaGee at 4:08 AM