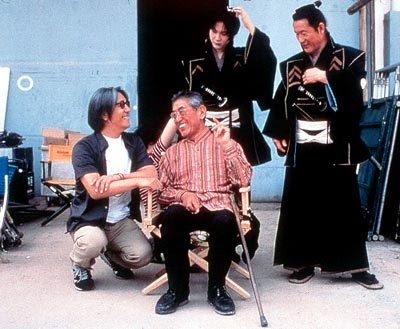 Any of you Torontonians who attended some of the later screenings of Cinematheque Ontario's "24 Japanese Classics: A Wreath for Madame Kawakita" series in the past few weeks already know that Cinematheque's senior programmer James Quandt has put together a retrospective of the films of Japanese New Wave director Nagisa Oshima for this autumn, specifially October 31st to December 9th, but what you may not know (I certainly didn't) is that the retrospective, titled "In the Realm of Oshima: The Films of Japanese Master Nagisa Oshima" will also be touring North America in the coming months.

Quandt has assembled a programme not only of some of Oshima's best known works like 1976's "In the Realm of the Senses", 1983's "Merry Christmas, Mr. Lawrence" and Oshima's last film 1999's "Gohatto" (pictured above with Oshima seated), but also his earlier experimental films "The Man Who Left His Will on Film" and "Death by Hanging" that will give cinema lovers in New York, Minneapolis, Vancouver, Cambridge, Seattle, Berkley, washington and Rochester a complete survey of one of the undisputed masters of Japanese cinema.

Check out Variety Asia Online for details on which cities will see this touring retrospective and then click here for the full line-up for all us lucky people living in Toronto.
Posted by Chris MaGee at 9:30 AM