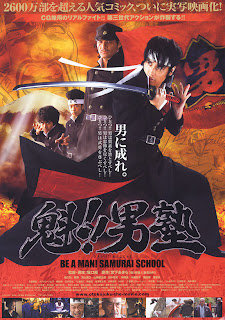 Like them or not, The Matrix and Crouching Tiger, Hidden Dragon changed the face of action films on a global scale. Yuen Woo-Ping’s balletic fight choreography seeped into every corner of the international market, influencing everything from television shows, films and commercials. Even elements of Wuxia wormed its way into the Western psyche, creating hybrids such as Warriors of Virtue and Bullet Proof Monk. And yet beneath all the beauty and the splendor of the more operatic fight sequences, there grew a movement that sought to bring action films back down into the mud.

A handful of people started a revolution of realism, trying to bring back the crunch that once occupied so many classic martial arts films. People like Donnie Yen, Jung Doo-Hong, Panna Ritikrai, Tony Jaa, Marko Zaror, Johnny Nguyen, The Stunt People and Tak Sakaguchi have tried to instill a sense of gritty, bone-breaking realism in the films they both starred in and choreographed. Part of this drive stems from the more traditional martial arts background they have. Older contemporaries such as Jackie Chan, Jet Li and Sammo Hung were trained in more operatic or forms-based martial arts. Even Bruce Lee, while an amazing off-screen martial artist like (his then contemporary Lau Kar-Leung), always injected his films with grand operatic form to dual a gritty sense of realism.

Tak Sakaguchi, before he made his debut in Versus, was working as a street fighter blessed with natural talent and speed. Stories abound of the amount of physical damage the action team took in the making of Versus, breaking ribs and loosing teeth. But the real test of talent comes when given the chance to make a film of your own. Tony Jaa almost crumpled under the weight of his epic Ong Bak 2, or did, depending on what you believe in the Thai tabloids. Donnie Yen made more artistic fare, with Legend of the Wolf and Ballistic Kiss, using the obvious low budget with an almost Wong Kar-Wai eloquence. Tak Sakaguchi, who once found pleasure in punching people in the face, now finds more in watching a Kurosawa film, and for his directorial debut, he opted to go the path less traveled. 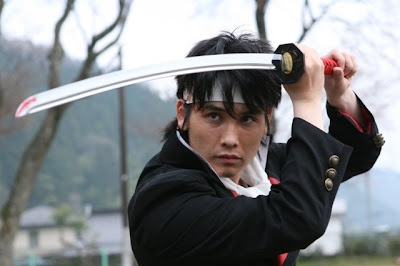 Be a Man! Samurai School, based on the popular Japanese manga of the same name, is not a modern take on the macho samurai film, but instead a satire of it. Hidemaro Gokukoji (Hiroyuki Onoue) is a first year student at Otoko-juku, a delinquent high school that uses the way of the samurai as its educational base. It also happens to be the most feared school in Japan. Hidemaro is a pale, timid guy and is only attending Otoko-juku to honor his mother, who is trying to preserve the family’s samurai lineage. At the school, he quickly befriends the mysterious uber-powerful Momotaro Tsurugi (Tak Sakaguchi), as well as the colossal brute Genji Togashi (Shoei). Soon a rival school attacks, forcing the principal to choose three students to enter the “amazing triple death battle.”

Sakaguchi doesn’t just make you cringe during the climatic slugfest he has with Hideo Sakaki, but (much like They Live with the classic Roddy Piper/Keith David, alley fight) he imbues it with such a ludicrous machoism that you have to laugh at it. And that’s how the entire film plays out, as a testament to the ridiculous nature of ‘being a man’ and the 70’s idea of the ‘classic man’ found in the films of Chang Cheh, Charles Bronson, Sam Peckinpah and their ilk, from the phallic lifting of the flag pole to Genji and his god-like virility. It is probably the last film I would have expected Tak Sakaguchi to make, and it is by far the most enjoyable debut of a martial artist. It’s frickin’ hilarious. Utterly ridiculous, yes, but hilarious.

Read more by Matthew Hardstaff at his blog.
Posted by Chris MaGee at 9:39 AM