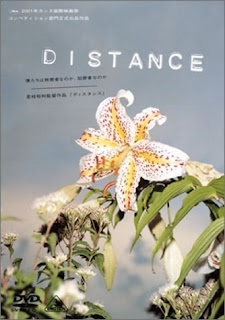 Hirokazu Koreeda's 2001 film "Distance" starts off feeling like something out of a science fiction story. A radio announcer reports that the next day will mark the third anniversary of the poisoning of the Tokyo water system by a group called The Ark of Truth. 128 people died, continues the announcer, and over 8,000 became ill after being exposed to a genetically engineered virus that the group had created. Shadowy, pseudo-religious rebels? Widespread bio-terrorism? You'd be forgiven for thinking that you'd stumbled into some live-action version of a Mamoru Oshii film, but this is hardly science fiction. "Distance" isn't set in some near future dystopia, but present day Tokyo, a city that was still dumbfounded as to how and why the Aum Shinrikyo cult had released sarin gas into several Tokyo train lines in 1995. As the news item ends with the announcement that tomorrow family members of the victims of the viral attack will gather at several water reservoirs to commemorate the tragedy we watch four anonymous people, Atsushi, Masaru, Kiyoko and Kai, work, conduct meetings, commute home, meet friends, all seemingly oblivious of the upcoming anniversary.

Atsushi (Arata) is a quiet man who works in a flower shop and visits his ailing father in a nursing home. Young and handsome Masaru (Yusuke Iseya) spends all his free time with his girlfriend hanging out at arcades and coffee shops. Kiyoko, a school teacher in her mid-30's, obviously loves her work, but it seems that her work may be all she has in her life. Kai (Susumu Terajima), a middle-aged salaryman, also spends the majority of his time working, but who likes to boast to his colleagues about his 1 1/2 year old daughter. Average people with average lives and at first seeming to have no connection to each other. That is until Masaru gets a phone call from Atsushi and the following day these four congregate at a train station in the country. These must be the family members of the victims heading out to commemorate their loved ones, we think.

Koreeda, whose previous films at that point had included "Maboroshi" and "After Life", doesn't take such a simple look at the aftermath of an Aum Shinrikyo style attack. We go on the above assumption as these group piles into a jeep and heads out to a small lake, lay flowers on the water and then spend a pleasant day in the country. It isn't until their jeep is stolen, leaving them stranded in the middle of nowhere and they are joined by a fifth person, Sakata (Tadanobu Asano) do we discover the truth. The group aren't the victims family members. They are the perpatrators family members and Sakata is one of the few cult members who isn't dead or in police custody. As dusk turns to darkness Sakata leads the four to the Arch of Truth's old compound where they all take shelter until morning. What follows is an uneasy night filled with memories, mourning and questions. 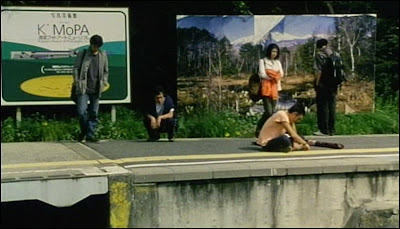 In some ways "Distance" takes from both of Koreeda's two previous films: the grief and questioning of a tragic event from "Maboroshi" and the mechanics of memory from "After Life". Why did these people's brothers, sisters, wives and husbands abandon them to join a murderous cult? What is left of their family members after this senseless attack? It also combines the technical aspects of it's predecessors as well using documentary style shooting and even lifting the seated interview sequences from "After Life" as the characters are questioned by police.

What's new in "Distance" is an added dilemma: when does our spirituality, or right to believe, worship and seek meaning in our lives cross over into mania, blind acceptance and misguided introspection. In the same way that the family members are average decent people so are their relatives, the cult members that we see during flashback sequences. We recognize ourselves in the perpatrators of the attack who in their own way are asking the same basic question as their surviving relatives, "Why?"

While over long and steeped in grief "Distance" does feature some amazing performances, especially that of Susumu Terjima as the deeply divided Kai, and in the end asks some very basic and crucial questions. Well worth a look.
Posted by Chris MaGee at 1:43 PM