Gaga Communications to take "Halfway" around the world 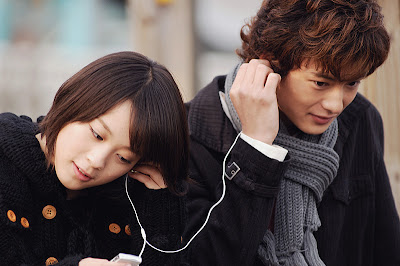 I just realized how odd that headline sounds. Let me explain. Back in the early days of the Pow-Wow blog it was announced that Shunji Iwai would be producing a film called "Halfway". We were in our infancy and we missed it, so... so take this as a bit of back tracking.

Variety Asia Online is reporting today that the international sales for the film will be handled by Gaga Communications, the same people who will be bringing us "MW" and the Tadanobu Asano starring "Don-ju", as well as the people who have brought films like "Blindness", "Sex and the City" and "Rambo" to Japan.

"Halfway" stars Kie Kitano and Masaki Okada as a young teen couple whose relationship is complicated as they approach their high school graduation. The film marks the directorial debut of Eriko Kitagawa, the screenwriter for such popular Japanese TV shows as "Long Vacation" and "Beautiful Life."

"Halfway" is set for release in Japan next year.
Posted by Chris MaGee at 4:23 AM