Now this is taking remakes a little bit too far 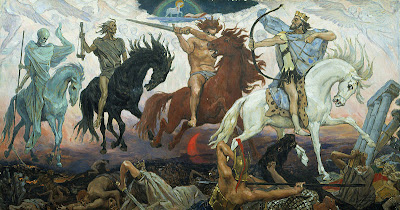 Why, you may ask, have I posted a painting of the Four Horsemen of the Apocalypse on the Pow-Wow blog? The answer to that is that besides them, rivers turning into blood and harlots riding beasts with 666 heads there's another key sign that the end of the world is nigh. That would be a remake of Akira Kurosawa's "Rashomon".

You heard that right. According to a report posted at Variety Asia Online today U.S. and Japanese producers are joining forces to hurry along the Apocalypse with plans to have an English language remake of the 1950 classic in theatres by 2010 to commemorate (or desecrate) the 100th anniversary of Kurosawa's birth.

In other news Orson Welles' "Citizen Kane" will be remade by Brett Ratner starring Jacki Chan and French architects will be disassembling and then reassembling the Eiffel Tower because they have nothing better to do with their time.
Posted by Chris MaGee at 4:48 AM