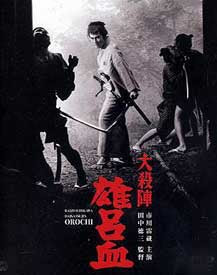 Tsumasaburo Bando (1901-1953) can easily be described as Japanese cinema's first action superstar. From the time he debuted in Buntaro Futagawa's 1924 film "Gyakuryû (Backward Flow)" the actor set himself apart from other jidai-geki actors that had proceeded him. While previous motion picture samurai relied heavily on theatrical techniques taken directly from kabuki theatre (exaggerated facial expressions, striking stilted poses during sword fights, etc.) Bando brought a new naturalness and fierceness to Japanese cinema, plus a highly individual and much more realistic fighting style. Not only did Bando change the onscreen representation of the samurai, but he also revolutionized the role of the actor behind the scenes as well. He created Japanese cinema history when in 1925 he founded the first independent production company, Bantsuma Productions, and played an active role in creating his own onscreen persona.

The most revolutionary of Bando's films was the second produced by Bantsuma and directed again by Buntaro Futagawa, 1925's "Orochi (The Serpent)." Not only was Bando's performance much more true to life, but the story, written by Bando's longtime collaborator Rokuhei Susukita, was groundbreaking in its pessimistic world view.

Heizaburo Kuritomi (Bando) is everything that a samurai should be and had been in Japanese cinema up to that point: skilled in combat, trustworthy, noble and of course loyal. Loyal to the code of bushido, loyal to his master Eizan, the calligrapher and loyal to his one true love, the virginal maiden, Namie; but it's his unbreakable loyalty combined with his naivete and quick temper that will ultimately lead to his downfall.When we first meet Heizaburo he is a valued samurai in service to Eizan, but when he feels that he has been treated dishonourably during an argument at a party by Namioka, a samurai of noble birth, things escalate into an all out brawl, but when Eizan comes in to break things up who do you think he's going to believe? The snarling Heizaburo or Namioka, the spoiled rich kid? Warned that if he causes any more trouble that he shall be severely punished Heizaburo is sent on on his way, but trouble seems to have a way of finding him. He overhears a group of three samurai spreading rumours that Namie isn't as virginal as she lets on, and the noble Heizaburo just can't let it slide. Swords are drawn and before you know it Eizan follows through on his promise and our hero is cast out to become a lowly ronin and thus begins the downward spiral of our hero. 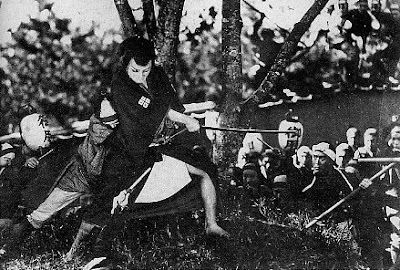 Although he has done nothing but uphold his honour as a samurai Heizaburo is unable to control his temper and in adventure after adventure he sinks lower and lower even landing in prison where he falls in with the famed Japanese thief Jirokichi, The Rat. Now known as "Heizaburo the Outlaw" he just can't seem to see past the smiles of these lowlifes which gets him into even more trouble. It isn't until he joins the household of Jirozo, an outwardly noble and well off man who secretly traffics women for prostitution, that Heizaburo finally comes to. One night his long lost love Namie and her ill husband arrive at Jirozo's estate seeking shelter, but Namie is quickly captured and it's up to Heizaburo to rescue her.

While I've been used to seeing many a Japanese film that have chronicled women falling from grace I think that this was the first time that I saw such a story use a man, a samurai no less, to illustrate its point that in a corrupt world it's often the most noble and well-intentioned who suffer the most; and that brings us back to why "Orochi" was such a revolutionary film. Up until that point onscreen samurai were heroes, pure and simple. They stood on moral high ground throughout a film, they vanquished their evil enemies and once the credits rolled there would be a happy ending. That simply doesn't happen in "Orochi". Not only does Heizaburo spend the majority of the film as an outlaw, but his brief redemption/ vindication at the end of the film is cut short when after one of the most spectacular sword fight sequences in Japanese cinema he is captured and carted off by Jirozo's men.

While "Orochi" isn't an easy film to track down it is one, that if you are given the opportunity to see it, you should not pass up. In it you have the first seeds of the modern cinematic samurai as exemplified by the roles of Toshiro Mifune, Shintaro Katsu and Tatsuya Nakadai.
Posted by Chris MaGee at 4:22 AM