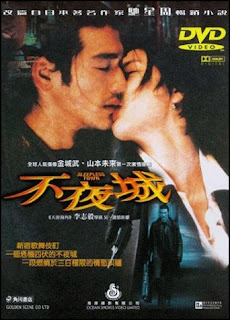 "I'm not Chinese or Japanese. Some call me a bat. Flying around in the dark using my radar to survive."

That's how Kenichi Ryuu lives day to day in Kabukicho - an area populated by shady underworld characters of mixed origins. Chinese, Japanese and Koreans all mingle in this maze of back alleys, twisting-turning passages and hidden rooms that make up this section of Tokyo. Since Ryuu's considered a mongrel (half-Chinese, half-Japanese), he gets no respect or consideration from the other dwellers and gang members. So he plays them all against each other.

Over the few days time span of the film, he's caught in between several different groups with conflicting requests, family obligations and a new woman in his life. As we follow his progress (with helpful reminders on the screen as to what time and day it is), he wrestles with being true to an old partner while also trying to stay alive. He's been tasked by gang boss Mr. Yuan to find and hand over his old friend Fu-chun. Sighted back in town, Fu-chun had previously killed Mr. Yuan's brother and Ryuu will be held responsible unless he can cough up the guilty party. Meanwhile, Ryuu receives an offer from Natsumi Sato - an unknown woman who has heard that Ryuu will buy anything (except for children's organs). Her offer? She wants to sell him Fu-chun's location. 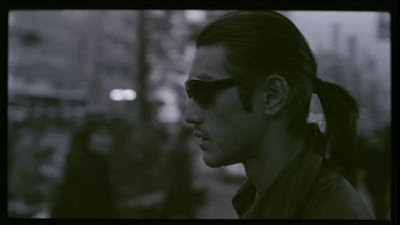 The story follows these twists and turns and double crosses with aplomb and though there are plenty of additional characters (including a wordless cameo by the great director Seijun Suzuki), it never becomes overly confusing or dull. Ryuu is played skillfully by Takeshi Kaneshiro - star of films by Wong Kar-wai and Zhang Yimou, teen idol for many young Chinese girls and considered Asia's answer to Johnny Depp. Though his character is a pretty conflicted guy throughout the film, you never doubt that he would indeed buy and sell just about anything.

The film moves ahead with a good steady rhythm while the different plot lines provide added syncopation to keep the viewer just a smidge off guard yet constantly engaged. And if the story doesn't work for you, the cinematography by itself is sure to keep you glued to the screen - colours come pouring out of the nooks and crannies of the night time scenes and match the diversity of the characters found there. Near the opening of the film there's a great 3-4 minute single take shot following Ryuu up and down staircases and through the streets and clubs of Kabukicho. By the end of it you've got the lay of the land - it's indeed a town that doesn't sleep and Ryuu shows us how to navigate through it.

Read more from Bob Turnbull at his blog.
Posted by Chris MaGee at 4:11 AM