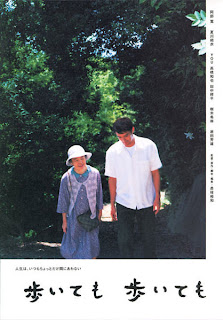 I lost track of the number of times I smiled or laughed in recognition during Hirokazu Kore-eda's latest film entitled "Still Walking". Not that I have any Japanese relatives in my bloodline or have specific experience with the situations in the story, but it was the little moments and details of the characters and their interactions with their family that resonated. Some examples: Grandma cooking in the kitchen with occasional help from just about everyone, stories related by the parents that have been told hundred of times before, actions mis-attributed to one child instead of another, a parent and child who are so alike that they fight constantly (and would be horrified if you told them how alike they were) and a young Nintendo DS playing boy who likes to mix Coke and Ginger Ale when he gets his fountain drinks (reminds me of an 8 year old who is asleep in my house at the moment)... Director Kore-eda mentioned in the Q&A afterwards that the script evolved from the passing away of his parents and the discussions of his childhood they had during the time they had left. For such a personal story, the audience laughter throughout the film showed there's a universal quality to these characters to which just about anyone can relate.

It's a gentle laughter to be sure, but it's very real and honest. And it's mixed in with some bittersweet moments as well as hidden resentments, regrets and other such family staples. In the case of this particular family, second son Ryo will never be fully accepted by his father since he did not become a doctor and has left the house (he's "only" a restorer of old paintings). As well, he has married a "used" woman (ie. divorced) and though the parents are welcoming to the new family member and her son, both are treated more as guests than as full fledged family. And the parents are still grieving somewhat over the loss of their eldest son years earlier in a drowning accident. 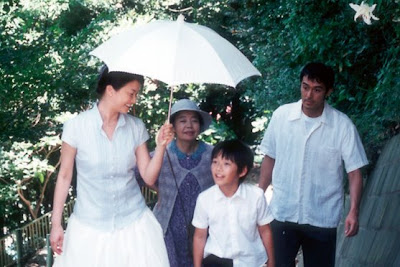 There's no big family secrets revealed or long time grudges repaired. It's just slice of life moments that slowly build a picture of a family - particularly that divide between Ryo and his Dad. Both are overly serious and prone to pettiness. But there's still time to, if not mend all the fences, at least spend some quality time together. Ryo's sister realizes this and I think it's the main point at which Kore-eda was aiming - those little moments with those you love can be very rich and rewarding. Make the most of them while you can.

Kore-eda sticks with mostly beautifully crafted static shots and let's his actors do the rest. And the acting is exceptional - there's an ease with which all the characters talk with each other and react to what each other says. You feel like this is a real family and that you've been invited into their house to spend time with them. It's a simple, quiet and lovely bit of filmmaking.

Read more from Bob Turnbull at his blog.
Posted by Chris MaGee at 7:09 AM