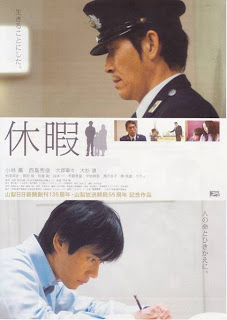 Most of the people that have heard about Hajime Kadoi's sophomore feature film "Vacation (Kyuka) have asked me the same things, "That's like Japan's version of "Dead Man Walking", isn't it?" To be honest before I caught a screening of it at this year's TIFF I would have assumed the same thing. What little has been written about it in the English-speaking media gives every impression that this is a film about a special bond that's forms between a prison guard and a death row inmate after the guard volunteers to be the prisoner's "support" or the person who restrains his body as it kicks and twitches after being hung. Special bond translates friendship, which translates to outrage at the barbaric practice of capital punishment, which equals "Dead Man Walking," but in actual fact nothing could be further from the truth. Kadoi in no way presents an amoral view of the death penalty in “Vacation”. He treats it with great tact and empathy, but he does so without many any value judgments on capital punishment because it’s not really what the film is about.

At its heart “Vacation” is the story of one man: Toru Hirai (Kaoru Kobayashi), a middle-aged bachelor who works as a prison guard on death row and lives with his older sister and her husband. In a gender switch from the old Yasujiro Ozu formula Hirai’s sister is determined to marry off her little brother to Mika (Nene Otsuka), a divorced single mother of a 6-year-old son, Tatsuya. Despite that fact that the prospective spouses are struggling to pay for their upcoming wedding and Hirai has no vacation time for a proper honeymoon Mika remains guardedly optimistic about getting married to this quiet, handsome man. Little Tatsuya, on the other hand, is suspicious of this potential new father and spends most of the days trips with Hirai and his mother hiding behind a sketch pad, scribbling pictures as a way of avoiding this huge change in his and his mother’s life.

Kadoi mirrors Tatsuya’s behaviour in Shinichi Kaneda (Hidetoshi Nishijima), Prisoner #350 in cell number three that Hirai and his fellow guards (played by Ren Osugi, Shuuji Kashiwabara and Shun Sugata) have in their custody. he too spends his days drawing in a sketch pad, mostly detailed copies of landscape photos her tears out of magazines, as a way to avoid not a looming life change, but the actual end of his life. Sentenced to death for murder he’s spent years writing petitions for an appeal, trying to convince the powers that be of his remorse and reform; and for once Nishijima’s flat and lifeless screen persona works for him, lending to the overwhelming sense that Kaneda is utterly exhausted from fighting against his fate. 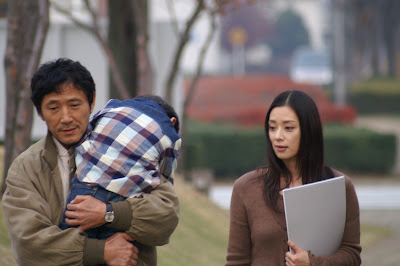 It’s not just Nishijima’s performance that comes off as tired and flat though. As much as I admire Japanese films for avoiding over the top dramatics I found myself wishing that someone on screen would show some kind of emotion. What screen time that Kobayashi and Nishijima spend together dashes any expections of a bond of friendship between the guard and prisoner. Mostly Hirai escorts his prisoner to the exercise yard or to meet with his lawyer exchanging only a few words with Kaneda. Also, we don’t get a sense that any familiarity has developed between Hirai and Mika. There don’t share any quiet laughter and never truly engage in conversation. Even little Tatsuya doesn’t cry or throw the occasional tantrum like most children in his situation might. Every emotion in “Vacation” seems to be set on quarter volume, all except for fear that is. Every character is harbouring a fear of the future, Kaneda, Mika, Tatsuya and especially Hirai, who as a way of proving that he is committed to getting to know this virtual stranger it’s been arranged for him to marry has volunteered as Kaneda “support” so that he’ll receive the week’s vacation that comes after the traumatic execution; and it is traumatic. Once Kaneda is escorted to the gallows Kadoi finally turns up the emotional volume and the minutes leading up to Kaneda’s death are truly terrifying.

As I said, though, “Vacation” ends up being about Hirai’s journey into a new life with Mika and her son with the extreme example of work as a death row prison guard used by Kadoi to show how Hirai, like any ideal Japanese husband and father, will take on heavy burdens, make hard choices and sometimes make great personal sacrifices for his family.
Posted by Chris MaGee at 8:39 AM