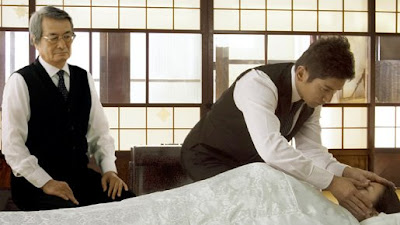 Word is spreading all over the net this morning (here and here amongst others) about Yojiro Takita's latest film "Okuribito (Departures)" winning the Grand prix des Americas, the top prize at the 32nd Annual Montreal World Film Festival. "Okuribito" is based on a short story by author Shinmon Aoki and stars Masahiro Motoki (Gemini, The Bird People in China) as an out of work cellist who returns to his hometown to take a job in a funeral home. Motoki is joined by in "Okuribito" by the supporting cast of Ryoko Hirosue and Japanese cinema veteran Tsutomu Yamazaki. Check out the film's official site here, and the trailer below.

Don Brown also points out over at Ryuganji.net that screenwriter Ryoichi Kimizuka, most notable for penning Japanese box office blockbuster "Bayside Shakedown", won the Best Screenplay Award for "Dare mo Mamotte Kurenai (Nobody to Watch Over Me)" the story of a police detective, played by Koichi Sato, and his relationship with the younger sister of a murder victim. Kimizuka in fact tied with Jesús G. Vilda and Xavi Puebla for the Spanish film “Welcome to Farewell-Gutmann.”

Congratulations to all the winners!