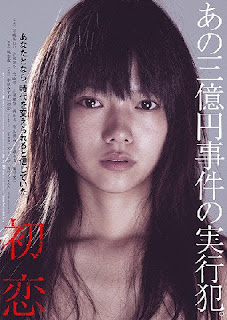 Man, what I wouldn't give for Kinji Fukasaku! That was my overriding thought as I watched Yukinari Hanawa's 2006 film "Hatsu-koi (First Love)". Of course Fukasaku had passed away three years prior to the release of this screen adaptation of Misuzu Nakahara's autobiography about her teen years hanging out with radicals and roughnecks and her supposed involvement in the 1968 "300 Million Yen Affair", so he couldn't have been enlisted to bring a bit of that Fukasaku fury, of underdog desperation to the proceedings. (Just check out Fukasaku's "If You Were Young: Rage", "Street Mobster" or even his comedic "The Fall Guy" to see what I mean.) Instead we get a film that wastes the turmoil, anger and sense of revolution taking place across Japan during the 1960s by using it as window dressing for a lukewarm coming of age story.

Misuzu, played here by "Harmful Insect" and "Eureka' actress Aoi Miyazaki, has just turned 16, that awkward age between childhood and adulthood, a time of questioning and testing boundaries. She gets into minor scrapes with the police and begs her aunt and uncle, whom she lives with, to extend her curfew. She also begins frequenting a jazz bar in Shinjuku, the kind of place that shady characters hang out in and high school girls don't. It's here that Misuzu falls in with a crowd of bohemians that spend their days drinking coffees, arguing and of course listening to jazz. There's Ryo, a ladies man and the defacto leader of the group, Tetsu, the fighter with a hair trigger temper, Yasu, the guy who's always ready with a joke and Takeshi, a young man who frequents rallies and protests to meet girls and harbours a desire to become a writer. The only woman besides Misuzu is an actress in an experimental theatre troupe named Yuka. Oh, and there's Kishi (Keisuke Koide), a buddy of Ryo's, serious and impenetrable, his nose always in a book and the one person that young Misuzu is most drawn to. 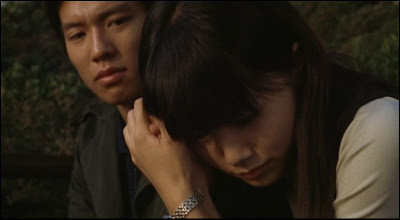 For nearly two years Misuzu lazes about in this basement club as part of this gang, but always on the periphery of their weekend fights, fucks and short stays in jail. It's only as they reach 1968 do these get more and more serious until they get caught up in a violent street protest that spells the end to their fun. It's after this that Kishi convinces Misuzu that he needs her to take part in a plan that will really shake up the system; the theft of ¥300 million in staff bonuses from a car driven by Toshiba factory executives. Misuzu agrees because she's never felt needed before and because she's begun to fall in love for the first time with Kishi.

The potential for a really interesting film is so tantalizingly close with "Hatsu-koi (First Love)". First you have a fascinating real life mystery, the theft of ¥300 million on December 10th, 1968, a crime that to this day has never been solved. Add to that the talented Aoi Miyazaki, some truly stunning cinematography care of Junichi Fujisawa who lensed Seijun Suzuki's "Yumeji" and Toshiaki Toyoda's "9 Souls" and the backdrop of the revolutionary 1960s, but as I mentioned off the top that's where the whole thing falls apart. Maybe Misuzu Nakahara never really fleshed out the supporting players in her autobiography. That might explain why Ryo and his gang just come across as all rebellious pose, but no youthful energy or motivation; but how can that explain the two dimensional quality of both Misuzu and Kishi in the film? Miyazaki has nothing really to work with and is left to frown and pout her way through her performance while Koide's Kishi remains unexplored even after we discover that he is the son of a high-ranking government minister.

Oh, Fukasaku-san! If this script had landed in your lap in the mid-70s we might have had a masterpiece on our hands. Unfortunately that wasn't the case. Too bad, that's really too bad.
Posted by Chris MaGee at 2:57 PM