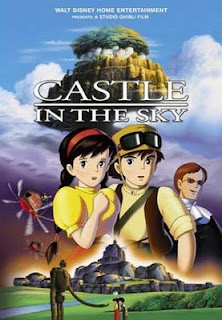 With Hayao Miyazaki back in the headlines with his latest film “Ponyo on a Cliff by the Sea” I thought it would be a good time to look back at one of his older, and I think one of his better films so that if there were, oh I don’t know, one or two people out there who hadn’t been totally charmed by his animated adventures that they could get a taste of what everyone else was raving about.

“Laputa: Castle in the Sky” (1986) was the second film to be released by the then two year old Studio Ghibli and it certainly had a lot to live up to. Its predecessor, Miyazaki ’s “Nausicaä of the Valley of Wind ”, had not only been a huge seller as a manga, but the success of the film version was actually the impetus for the creation of Studio Ghibli in the first place. It’s often cited as being one of Miyazaki’s masterpieces (you’ll get no argument from me on that point), with all of the director’s hallmarks of a female heroine, the conflict between humanity and nature, exotic flying machines and morally ambiguous characters in place right out of the gate. All of these are present in one way or another in “Laputa” as well, but Miyazaki takes a bit of a softer touch in a film that was obviously more geared towards the kiddies. 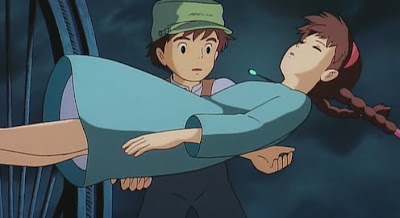 The story centers around Pazu, a boy who spends his days toiling underground in a small mining town while his nights are spent crafting an elaborate flying machine that he hopes will lead him to the mythical floating island of Laputa. Little does he know that Laputa will meet him halfway. One night a beautiful girl, Sheeta, literally drops from the sky after escaping both a nefarious government official named Muska and a group of rag-tag sky pirates called the Dola Gang. What could both the government and pirates want with a little girl? Well, both of them believe that she and the tear drop blue gem that she wears around her neck hold the key to untold wealth, power and Laputa itself. Thus fate brings Pazu and Sheeta together for an adventure that takes them from Pazu’s backwater home to behind the ramparts of military fortresses, and then from the deepest caves to a magical world above the clouds where both children may learn the secret of their true parentage, the source of Sheeta’s magical necklace and what truth is behind the myth of Laputa.

I’ve often felt that “Laputa” doesn’t get the love it deserves from critics. Sure, “Nausicaä” may have the Miyazaki passion for nature and disdain for civilization pushed to the fore, but it’s the very fact that “Laputa” lets these societal and environmental polemics take a back seat to a childlike story of swashbuckling adventure that makes it a real favorite of mine. What kid doesn’t want to leave their boring life behind and join the crew of a pirate ship? Especially when the pirates turn out to be a bunch of friendly mama’s boys who pilot some of the most ingenious looking flying machines to appear in any animated film.

It’s not just action, explosions and amazing chase set ups that makes “Laputa” one of my favorite Miyazaki films. From the opening shot showing an astounding airship maneuvering through a nocturnal cloudscape to the lilting music of Miyazaki regular Jo Hisaishi through scenes of Pazu and Sheeta sharing a lunch of fried eggs and apples in an underground cavern and the domestic day-to-day life aboard the Dola’s ship, The Tiger Moth, Miyazaki proves time and again that he’s a master of small detail and mood. The air battles wow me, the Laputian robots captivate me, but it’s the comfort of these quiet scenes that have brought me back to “Laputa: Castle in the Sky” over and over again.
Posted by Chris MaGee at 4:14 AM