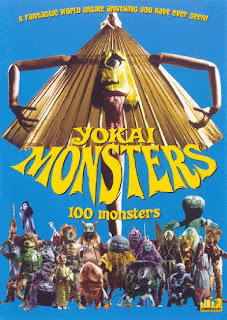 In Japanese folklore, there are various monsters and spirits called the Yokai - they can be part beast, part human and part spirit with a variety of different supernatural powers.The first of three films in the "Yokai Monsters" series, 1968's "One Hundred Monsters", starts with a social gathering of the members of a village (elders, workers, kids) where stories about the Yokai are related in spooky detail. For each story told, a candle is blown out. At the end of the gathering (called the "One Hundred Stories"), when the last candle is put out, it is said that an apparition will visit. Of course telling stories about Yokai is one thing...Allowing them into your house is another. So to avoid these apparitions, it has become tradiiton to perform the curse elimination ritual. But what happens when you don't take it seriously?

After this opening scene, we soon meet the evil henchmen of land owner Tajimaya. They plan to not only tear down the village shrine, but also the entire tenement building. With most of the men of the village off working, things look bleak...On Tajimaya's side though, they are celebrating and a special evening of the "One Hundred Stories" is arranged and stories are told. But the end ritual is skipped. 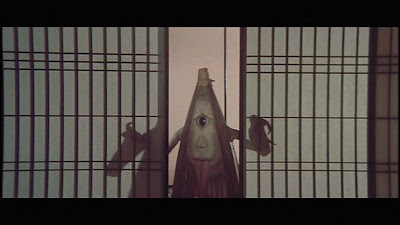 The setup and premise of the film is mostly an excuse to show a variety of these Yokai monsters - both as real apparitions for those who don't perform the ritual or who anger the spirits as well as within the stories being told at these gatherings. If I was a perhaps a bit disappointed at the relatively small amount of monster time the film provided (the plot points take up a lot of screen time in the 80 minute film), it was only because those sections were so well done and so entertaining. There's no CGI or special effects here. For the most part the monsters are created using costumes, masks, shadows and occasionally a few visual effects (like double exposure, etc.). It's amazing how very effective these techniques can be and what a wide range of monsters can be created. There are several scenes of groups of monsters dancing or taunting a victim and you get a good idea of the grand imagination at work. My favourite moments were the appearances of the long-necked woman and the umbrella creature. The former is one of the better creepy moments of the film while the latter offers some goofy silliness to the proceedings.

And what better mix could you ask for in a monster movie? Good creepy silly fun.

All three of these late 60s Yokai Monster films are available in a single low priced 3 disc set from ADV Films (I paid only $18 dollars for mine). It should be easily available from major online DVD vendors.

Read more from Bob Turnbull at his blog.
Posted by Chris MaGee at 4:57 AM