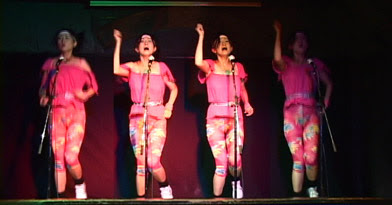 The four films included in the Zakuro programme are all part of Yukiyasu Shimada’s Immoral Film Festival and have been brought to this year’s Toronto Japanese Short Film festival in conjunction with Nippon Connection On Tour. All of these somewhat naughty and subversive experimental films were screened at Nippon Connection in Frankfurt this year, so it’s definitely a treat to have gotten a chance to see them here in Toronto even if not all of them were a total success.

A group of bleary-eyed 20-somethings, 4 men and 2 women, stumble through the nearly deserted early morning streets of a city. They pat their pockets down for cigarettes, stop at vending machines for drinks, go to throw up in public washrooms and get lost trying to find the train station, but why? Director Koji Maeda doesn’t tell us anything about who these people are, he just follows ahead of them with his camera capturing every yawn, shuffle and squint. It’s only once we pick up on scraps of their conversation do we start to get what kind of wild night they’re all recovering from:

“He told me to get her to drink that much.”

“You should probably go to the hospital.”

“You were much better than him.”

“Did he lick your nostrils?”

“If you end up pregnant it’s probably by me.”

Hiroshi Sato is a bit of a sad guy. The not particularly handsome single 40-years-old lives alone in a messy shoebox-sized apartment and has worked as a part-time security guard for 12 years. His only pleasures in life are going to a man-made pond to fish for goldfish and spending his evenings at hostess club with a young woman who he says looks like a Japanese pop star. Imaoka does more than interview Sato in this 23-minute documentary, he fulfills his dream by setting Sato up on a date with the girl from the hostess club… but in point of fact it isn’t the girl from the club, but an actress. Sato doesn’t seem to mind though and through an afternoon of fishing for goldfish and singing karaoke it’s obvious that he becomes smitten with this replacement woman, and this is what makes “Woman of Golden Fish” so interesting. Can men’s sexual fantasies revolve around just a single beloved woman or will we simply replace her with the next best-looking thing that comes along. In this case it’s the latter. Man, we really are hounds!