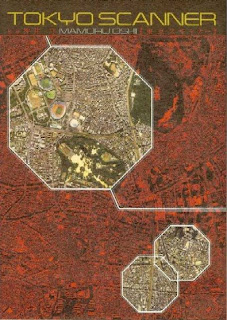 Okay, here's a proposition for you: Mamoru Oshii, the anime genius behind "Ghost in the Shell" and "The Sky Crawlers" wants to take you on a virtual tour of the city of Tokyo using cutting edge satellite and CG technology. Sound like a trip you'd want to take? When I heard that the Oshii supervised 20-minute film "Tokyo Scanner" (2003) directed by Hiroaki Matsu was going to be a part of Toronto's 3rd Annual all night Nuit Blanche art expo my answer to the above question was "Hell yes!" but after lining up with the rest of the Nuit Blanche-ers I came out terribly disappointed.

Okay, maybe I went in with high expectations. Oshii is one of the artists, along with cyberpunk author William Gibson and "Blade Runner" director Ridley Scott, who has shaped the public's conception of what a future city and future technology will not just look like, but how it will change who we are as human beings. For him to focus his attention on Tokyo , a city that is not just ancient, but is only a few heartbeats away from being a cyberpunk utopia/ dystopia straight out of Gibson seems like a match made in heaven, but if that's the case then why did I come out feeling like I'd just watched a half-baked Discovery Channel documentary? I'll try and answer that question by starting from the top.

Starting out over Tokyo Bay the all seeing satellite and/ or helicopter eye of director Matsu's camera shows us the absolutely massive landscape that is contemporary Tokyo : a city that began 700 years ago as a fishing village but has now swelled to encompass 23 wards and 12,790,000 souls packed into just 2,000 square kilometres. Viewing it from this vantage point it's hard to conceive that the city was nearly destroyed twice, first during the Great Kantō Earthquake of 1923 and then during the allied bombings of WW2. Oshii's vision of the post-apocalyptic "New Tokyo" in "Ghost in the Shell" doesn't need to be imagined, it's right in front of us at the beginning of "Tokyo Scanner". The camera pans and zooms with additional robotic sound effects onto the Arakawa Wangan-Bashi bridge and then follows the Arakawa River into the city and our final destination of the Roppongi Hills. Through the next 20-minutes we're treated to an aerial tour of the city. Shibuya, Shinjuku, Tokyo Station, Odaiba and Palette Town, all the postcard locations are covered; the footage accompanied by more electronic whizzes and beeps as well as a propulsive techno soundtrack... and that's about it. 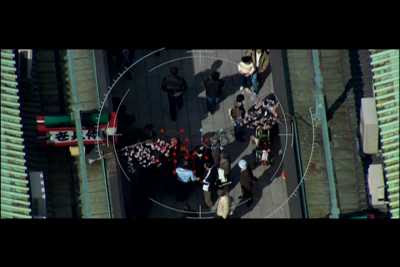 It was this unchanging, tourist postcard feel to the film that really sunk it for me. I couldn't help wishing that as the satellite camera zoomed down to highlight groups of people, as it does often during "Tokyo Scanner", that we might be treated to a little eavesdropping, snatches of dialogue reminiscent of Coppola's "The Conversation" or Wender's "Wings of Desire", just a tiny entryway into the lives of the people of Tokyo, but "whizzzz - BEEP" and we fly off to the next gleaming skyscraper. So Oshii and Matsu don't take any artistic license with their view of Tokyo . Okay, then how about your standard documentary voice-over for a bit of background info, but even that isn't forthcoming. Without anything but one unexplained vista after another I just found myself slipping into boredom.

To be fair "Tokyo Scanner" as well as its companion film "Tokyo Vein" were both created for an exhibition that took place in 2003 to commemorate the redevelopment of the Roppongi Hills, so it's not like Oshii was going for auteur filmmaking, but as much as I'm not happy with the amount of directors who go back and tinker with their films decades after they've been released it would be really interesting to see what Oshii and Matsu could do with "Tokyo Scanner" now, because frankly without the display cases and audio tours that I'm sure were a part of the Roppongi Hills Exhibition there's nothing much to this film at all.
Posted by Chris MaGee at 5:03 AM