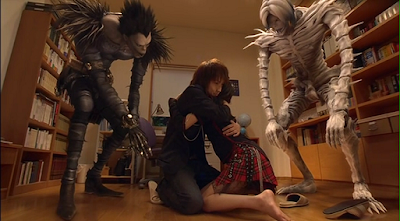 Following up on their successful one night Canadian theatrical run of "Death Note" this past September the folks at Viz Pictures will be doing it again, this time with the sequel "Death Note: The Last Name". On December 3rd participating Cineplex and Empire Theatres will screen the continuing battle between Light Yagami (Tatsuya Fujiwara) and L (Ken'ichi Matsuyama) as well as an exclusive behind-the-scenes featurette and a video interview with director Shusuke Kaneko.

Tickets go on sale today, November 7th, across Canada. Click here to check out which theatres near you will be screening this one night only "Death Note: The Last Name" event. In the meantime here's the English-subbed trailer for the film: