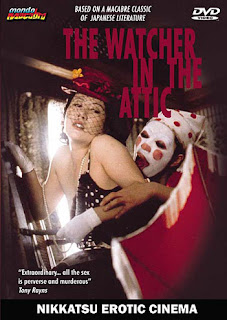 Tokyo, 1923. Goda (Renji Ishibashi) is an eccentric and rather gloomy young man living in a large rooming house. His only means of support comes from an allowance he receives from his wealthy parents. Without the inconvenience of having to work Goad has plenty of time to indulge in his favorite pastime: creeping through the building's attic so he can spy on the other equally eccetric tenants of the rooming house. There's the artist who spends her time painting the bare flesh of her model rather than churning out canvases, an elderly Catholic priest who feels it's not enough to simply hear the confessions of the chambermaids who visit his room, but acts out their more sinful moments with them, and most importantly for Goda there's Lady Minako (Junko Miyashita) who's not a permanent resident of the house, but a visitor slumming it in this back alley neighbourhood of the city. Several times a week the aristocratic and beautiful Minako is chauffered to the rooming house for erotic liaisons with everyone from a high class older gentleman to a street mime dressed in a Pierrot costume. Even Minako's driver gets in on the act, having constructed a special chair inside which he can hide while his employer sits and masturbates. It's this woman that is the center of Goda's fantasies, and not only because of her very unique sexual quirks. It seems that for Lady Minako the sex itself is only the foreplay to her real physical release: the murder of her partners. It's with a mix of fear, admiration and burning desire that Goda returns again and again to the attic to witness these deadly encounters.

Kinky sex. Violence. Death. These are the hallmarks of Japan's gothic horror/ mystery master, Edogawa Rampo (1894-1965). Japanese film fans have seen his works adapted in dozens of films: Yasuzo Masumura's "Blind Beast", Teruo Ishii's "Horrors of Malformed Men", Rintaro Mayuzumi and Kazuyoshi Okuyama's "Mysteries of Rampo", and the list goes on and on. For his 1976 pink film director Noboru Tanaka cranks up Rampo's "ero-guro-nansensu" (erotic-grotesque-nonsense) aesthetic to create "The Watcher in the Attic", a film that tries to repel at the same time that it tries to titilate. The only problem for me is that I was niether repelled or titilated as I watched "Watcher". Instead I found myself drawn into a 76 minute fever dream, alternately lulled and jarred by the surreal imagery and situations that would not be out of place in the films of Luis Buñuel. So, is that really a problem? Probably not.

Without any real plot Tanaka and screenwriter Akio Ido use each erotic episode to show how Minako's shamelessly murderous desires begin to force Goda out of his hiding place in the rafters; not as most viewers would imagine to prevent the deaths of more innocent people, but through the horrific realization that he and Minako may be kindred spirits. This obviously makes "The Watcher in the Attic" a fairly dark and nihilistic experience, but Goda's slow maturation into a killer also provides some trult beautiful and poetic screen moments. I'm thinking specifically of a scene in which Goda makes himself up like Ladys Minako's Pierrot for his session with a prostitute, their lovemaking interrupted for a moment by an old song playing on a phonograph and the prostitute just sits astride Goda and stares out at the people going about their lives on the street outside. Fantastic stuff. And of course I have to mention the climax of the film: the Great Kantō Earthquake that's not only used to tie everything off neatly, but also provides the most chilling image in the film: the rooming house cahmberaid primes a water pump in the middle of the destroyed Tokyo cityscape only to have it gush forth with blood.

Of course a film like "Watcher in the Attic" is going to get an audience thinking about voyeurism and questioning how we factor into the equation as we sit on our couches watching the watcher. It was this thought that brought me back (or I guess forward) to Yutaka Tsuchiya's 2004 film "Peep TV Show" about a young cyber voyeur who spies on random people and broadcasts their daily lives on the internet, a film that I would recommend to anyone who sees Tanaka's "The Watcher in the Attic" and want to indulge a little more in a bit of peeping of their own.
Posted by Chris MaGee at 5:12 AM