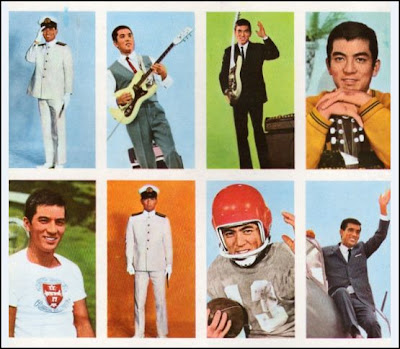 Once again I wanted to write something about a Japanese celebrity who’s enjoyed huge success in their home country, but for one reason or another hasn’t managed to really register on the radar here in North America . This week I wanted to highlight the “Young General” himself, Yuzo Kayama.

Kayama, was born April 11, 1937 to Japanese cinema royalty, his father being Ken Uehara, one of the biggest stars of the 1930s. Kayama would end up staking his place in the canon of cinema by working with some of the most respected filmmakers in Japan . Kichachi Okamoto cast Kayama in his dark 1966 samurai epic “Sword of Doom” in which he played Hyoma, the young samurai tasked with killing Tatsuya Nakadai’s psychotic Ryunosuke Tsukue. Kurosawa cast him in two of his film, “Sanjuro” and “Red Beard”, both times opposite the legendary Toshiro Mifune. Kayama also starred in Mikio Naruse’s 1964 drama “Midareru (Yearning)” and Hiroshi Inagaki’s “Chushingura”. Despite his roles in these classics Kayama is only marginally known by North American film fans. This is definitely not the case with the older generation in Japan , although there Kayama is known for a whole other kind of film.

After a series of minor hits like Zenzo Matsuyama’s “The Happiness of Us Alone” and Yasuki Chiba’s “Lovers of Ginza” Kayama shot to national fame starring in the 1961 film “Daigaku no wakadaishô (University Young General)”. Movie audiences fell in love Kayama’s character, the handsome and clean-cut college student Yuichi Tanuma. The execs at Toho saw dollar signs (or yen signs) and went on to make 15 more “Wakadaishô” films, and in the process provided a sanitized alternative to the growing genre of youth gone wild films like epitomized by Ko Nakahira’s “Crazed Fruit”. Think of a Japanese version of Frankie Avalon and Annette Funicello’s “Beach Blanket Bingo” and you’ll start to get an idea of what the “Wakadaishô” films were about, and like his American counterparts Kayama didn’t just stop at acting. Throughout the 1960s and 70s he rode the wave of popularity of the “Eleki Buumu” or the Electric Boom of surf-inspired electric guitar music. Kayama had a string of number one hits both as a solo act and front his band The Launchers and he actually played a pretty mean guitar, especially on his biggest hit “ Black Sand Beach ”.

Kayama’s career faltered once the “Wakadaishô” films finally petered out in 1971. After starring in an unsuccessful TV Asahi series based on Osamu Tezuka’s dark genius surgeon, Black Jack he returned to the character of Yuichi Tanuma one last time in 1981’s “Kaettekita wakadaishô (The Young General Returns)”, but at the age of 45 he was hardly the handsome youth anymore. Nowadays Kayama still makes the occasional TV appearance and still tours the nostalgia circuit singing and playing guitar, giving the older generation a chance to relive their days of youth along with Wakadaishô, the Young General.

(*Damned if I could track down trailers for any of the “Wakadaishô” films on YouTube, but I did track down some videos below that give you a good cross-section of Kayama’s career.)