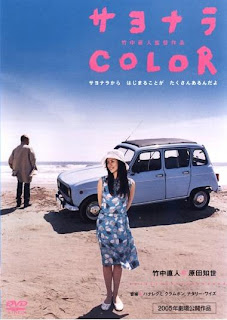 There are a couple of really big "what ifs" at the heart of "Sayonara Color": "What if you you got a second chance at love with your big high school crush?" and "What would you do if you found out you had terminal cancer?" Either of these "what ifs" has enough scope to drive the plot of a feature film, but for his fifth time running things behind the camera comedian, actor, singer and of course director/ writer Naoto Takenaka, along with co-writer Masaru Baba, decided to marry both together in this pleasant if unrealistic 2005 romantic drama.

Dr. Shohei Sasaki, played by Takenaka, is an oncologist at a seaside hospital. One day a female patient is admitted who literally takes Dr. Sasaki's breath away. It's not just because Michiko Oikawa (Tomoyo Harada) is beautiful, but because she, as Sasaki puts it to his fellow doctor Maeda was his "first and only love" back in high school. Fate certainly works in strange ways and sometimes cruel ways because Michiko, no matter how hard she tries, can recall her former classmate. Even though Sasaki was more than persistent in trying to win Michiko's affections when they were students he certainly wasn't the most popular or memorable boy in school. Hidden behind a bowl haircut and horn-rimmed glasses Sasaki was nicknamed "Sa-saikin" or "The Germ" by the other kids, the class nerd who you'd never guess would become a successful doctor. But "doctor", "germ", Michiko starts making the connections and soon the two are reminiscing about the old days and Sasaki's hopes of love are rekindled, but fate takes an even crueler turn when Michiko is diagnosed with terminal uterine cancer; but Sasaki refuses to believe there's no hope and applies his boyhood persistence to the very adult goal of beating Michiko's disease. 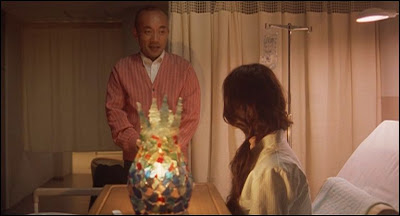 Sounds like a really soppy, two Kleenex box weeper doesn't it? It definitely could have been, but I was pleasantly surprised that it wasn't. The main reason behind this is the character of Sasaki himself. Most directors and screenwriters would pluck a doctor out of a soap opera for this type of film; handsome, square-jawed, a paragon of the medical profession and the epitome of a caring and sensitive man, the kind of doctor who would get his female patients' pulses racing. Not that Sasaki isn't caring and sensitive, but he is also deeply flawed. First off he's a bit of a drunk and a pig. That's established within the first 3-minutes of the film when we see him wake up in his car with a hangover and then grab a nurse's ass at the hospital. Add to that that his lover Seiko (Shoko Nakajima) is the mama-san at his local bar and that he isn't above indulging in a bit of enjo kosai or "subsidized dating" with high school girls and you don't have your average romantic leading man. He's no "Bad Lieutenant" mind you, but he's not Colin Firth either.

Michiko is a little more in keeping with the female lead in a romantic drama: demure, but sexy and a bit headstrong (she'd have to be headstrong to deal with uterine cancer), plus she's very forgiving of her men, both Sasaki's boorishness and her boyfriend, a stylist named Suzuki's (Yasunori Danda) unfaithfulness; but Michiko has more than flawed men in her life. She's lived in France, is fluent in the language and is a gifted craftsperson, creating lamps out of multi-coloured sea glass. It's this crafty, Provençal influence that Takenaka carries throughout "Sayonara Color" even using French musical giant Camille Saint-Saëns "The Swan" as a motif for the film's lovely soundtrack. Watching the film reminded me of walking into one of those country craft stores filled with handmade items, the scent of cinnamon and lavendar and Saint-Saëns, Satie or Debussy playing on the stereo. Soothing and pleasant, yes, but not when you're making a film about a fatal illness. "Sayonara Color" avoids some of the romantic drama clichés, but at the same time it totally avoids the terror, sadness and regret of someone who may be staring down her last days, and despite being quite gentle and pleasing to watch it's this fatal flaw that ultimately derails the film.
Posted by Chris MaGee at 3:26 PM